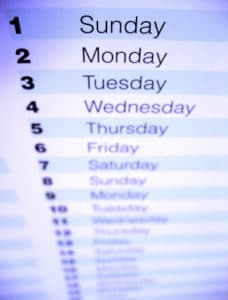 Deadline: Agreed outcome had to be submitted 28 days before hearing

The Solicitors Disciplinary Tribunal (SDT) has criticised both the Solicitors Regulation Authority and two former directors of a Preston law firm for their “careless and disrespectful approach” in applying for approval of an ‘agreed outcome’ only a day before their hearing.

The pair were accused of multiple accounts rules breaches and also allowing non-solicitors to control the firm.

A directions hearing in April said that any agreed outcome had to be submitted to the tribunal at least 28 days before the substantive hearing. However, a joint submission by the SRA and one of the solicitors was only sent at 2.05pm the day before.

The SDT emphasised that its directions “must be adhered to save in exceptional circumstances” and a party facing genuine difficulty in complying should apply to vary them.

“If directions are ignored, parties should not expect the tribunal to be accommodating. The tribunal noted that in this case there had been no application to vary [the directions].

“That failure, coupled with the submission of an agreed outcome less than 24 hours before the substantive hearing was due to begin, was unacceptable and demonstrated a careless and disrespectful approach to the tribunal…

“The tribunal was not satisfied that there was any reasonable basis upon which to waive the 28-day requirement and accordingly it declined to consider the agreed outcome.”

As a result, the tribunal went ahead with the hearing as scheduled, involving David James Ahern, 59, who held a practising certificate subject to conditions, and Naveed Mudasser Akbar, 39, who was currently a practising barrister, although his name remained on the roll.

They admitted multiple breaches of the accounts’ rules, including the failure to allocate almost £109,000 in withdrawals from client account.

The SDT said Mr Ahern, the first respondent, had acted recklessly in allowing the shortage in client to continue over a period of 18 months.

“In assessing culpability the tribunal found that the first respondent’s motivation was to keep himself in employment in difficult economic circumstances.

“The misconduct was not planned but nor was it purely spontaneous. It arose from the circumstances in which the first respondent had found himself. He had considerable PQE but his experience in managerial matters was very limited.”

The SDT found that Mr Akbar’s motivation for the misconduct was to assist a referrer who was intending to refer claims management work to the firm.

“He had allowed himself to be caught up in this arrangement and was therefore also reactive to the circumstances in which he found himself.”

The tribunal said there was a distinction between Mr Ahern and Mr Akbar, in that the former was the COLP and COFA. But then Mr Akbar, unlike his colleague, was the owner of the firm.

The SDT heard that following his acquisition of the firm’s share capital in 2013, Mr Akbar gave up his practice as a solicitor in order to take up a pupillage, while continuing to remain a director of the firm.

Mr Ahern resigned as a director in January 2015 and the SRA decided to intervene into the firm that April.

The two former directors admitted failing to allocate receipts and withdrawals into client account between June 2013 and June 2014, failing to obtain or preserve bank statements relating to six of the accounts, and allowing a shortage in client account which was not shown in the reconciliation statements.

They also admitted failing to participate in the management of the firm or discharge their duties as directors between October 2011 and April 2015.

Mr Ahern and Mr Akbar further admitted allowing the firm to become subject to the direction and control of “unadmitted persons”, including a struck-off solicitor.

“In their respective interviews the respondents confirmed that day-to-day control over the firm was being exercised by PC, an unadmitted management consultant.”

Mr Akbar stated that a former solicitor who had been struck off the roll but was employed with the permission of the SRA from September 2011 onwards, was also involved in running the firm.

“At the same time, throughout the period during which the respondents were the firm’s principals, JH was also involved in its management at a more senior level from July 2013 onwards. JH was involved in the operation of a claims management company which referred claims to the firm.”

In addition to the joint allegations, Mr Ahern admitted failing to record compliance failures in his role as COFA of Birley, including a material breach of the accounts rules.