Scully: Not having gone to university was “terrible stigma” 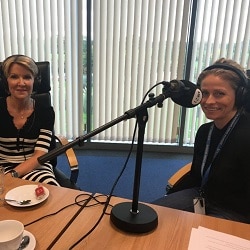 A leading personal injury lawyer has described how working for a “posh law firm” while not having gone to university felt like “a terrible stigma”.

Donna Scully, former chair of the Motor Accident Solicitors Society, said people would ask her which university she had gone to before they asked her name.

“When I started to work in London and worked in a big, posh law firm, everyone had a masters or whatever and I didn’t have that. I was doing the legal executive course because I didn’t the money to do a law degree full-time.”

Ms Scully, who left school at 16, said: “I felt inadequate. Oh my God, I’m the one who’s different to everyone else. I didn’t really want to talk about it.

“People wouldn’t even ask me my name in London – they’d ask about my university before my name. That’s horrible, you know.

“As I’ve got older, I’ve realised the importance of being honest. I do want to say what my background is in a way that might empower other people who might come along.

“If people look at you, they may think you know everything and have everything, but you don’t.”

She admitted to having ‘imposter syndrome’, as did Ms White, because of her background.

“I thought initially it was about people who were massively successful, but the more I’ve read and thought about it, I’ve realised that it could happen to anybody.

“I come from a working-class background. If you get somewhere you don’t expect to, you get a feeling of ‘am I good enough?’

Ms Scully said she was not looking for which university potential new employees went to but how good they were as a person, whether they wanted to be part of the team and whether they had drive and ambition.

On women in the law, she said successful women who were “really aggressive” made her feel sad.

“You don’t need to be aggressive. We can bring something different to the table. We can have empathy, we can be nice to each other – it’s more constructive and will get us further.”

Ms Scully said her law firm, which employs around 1,000 people, was 50/50 male to female from the top level to bottom.

“If you ask why we are successful, it’s partly down to the staff. We have great men and great women who work well together.”

The solicitor is actively involved in raising money and collecting food for homeless people on Merseyside, and said staff at Carpenters were “unbelievable” in their support – recently the firm sent a “colossal amount of food” to a food bank.

“If you asked whether part of our success was because we’re community-spirited, I would say yes. I think we have a real bond as a firm because we do a lot of good together. There are loads of people in need.”