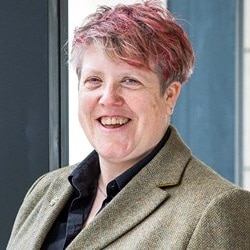 The Law Society of Scotland has criticised the Solicitors Regulation Authority’s (SRA) call for the government not to exempt small law firms from paying the proposed economic crime levy.

It accused the SRA of failing “to grasp the dire economic reality” solicitors were facing across the UK.

The levy will fund further anti-money laundering (AML) activities, paid for by businesses subject to the Money Laundering Regulations.

The Treasury suggested [1] the levy could consist of three separate elements: a levy based on revenue – potentially £100-200 per £1m of turnover – a small business exemption and, if possible, a money laundering risk weighting.

However, in its response to the consultation, the SRA said [2]: “The risk that small firms pose should be reflected in their contribution to the economic crime levy. For these reasons we do not believe that small firms should be exempt from paying the levy.”

She explained: “There can be no question of the legal profession’s commitment to tackling economic crime resulting from money laundering activities.”

This was funded by the profession, “meaning Scottish solicitors already contribute to measures that benefit everyone in society”.

She went on: “It is also being proposed at a time when solicitors’ firms across the entire UK are struggling in the worst recession on record, while at the same time making sure they continue to meet the needs of clients, with many also having to invest heavily in technology to ensure the continued smooth-running and effective administration of justice.

“It seems the SRA has failed to grasp the dire economic reality solicitors across the UK are facing.”

SRA general counsel Juliet Oliver responded: “Firms might have a number of factors that contribute to their risk regardless of their size, for example clients from high-risk jurisdictions, offering services in high-risk areas or not meeting clients face-to-face will all increase risk.

“If there was to be a levy, then given the absence of alternatives to reflect firm risk, we agreed that charging based on turnover or revenue is the best available option at this time, with smaller firms appropriately banded.”

In its response to the consultation, the Law Society of Scotland said it was “diametrically opposed” to the introduction of a further levy on solicitors “and particularly at a time when so much is being asked of the legal professions in order to keep our society operating”.

The society argued that, as wider society benefitted from anti-money laundering activity, it should be funded centrally rather than through the legal and other professional services sectors

It also said that, with the Scottish legal market around a tenth of the size of that in England and Wales, there was “greater sensitivity around cost”.

The Law Society of England and Wales has also strongly opposed the levy [3], which it said “would effectively be an additional tax on the regulated sectors, in order to fund the public sector’s role in the AML system”. If it were introduced though, it supported the small business exemption.