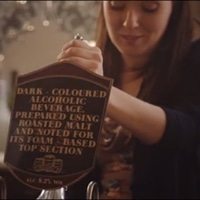 Over-50s company Saga has launched the first television advertising campaign for its legal services division, satirising the notion of lawyers being long-winded.

There are two adverts, one for will-writing and the other for probate services (see end of article to watch them), which envisage what life would be like if everyone spoke like a lawyer.

“Even something as simple as ordering a pint at your local would become a baffling ordeal,” Saga says.

The wills advert begins with a man outside a pub wishing his friend “Salubrious departure, Bri. Send my positive sentiments to your progeny”, after which actor Michael Fenton Stevens turns to the camera with the question: “Imagine if everyone spoke like a lawyer.”

The probate advert is set in a restaurant and starts with a cloakroom attendant asking a customer, “May I deposit your sleeved outer garment in our storage facility?”

The spots emphasise Saga’s proposition that it “likes to keep things straightforward”, especially with legal services, and cut through the jargon. It promotes Saga’s fixed-fee proposition and highlights the fact that people can call seven days a week.

Saga has a history of digging at lawyers, claiming after it launched its legal services arm that some lawyers may be exploiting bereaved families by overcharging for probate.

In November 2013, it formed a joint venture alternative business structure with Parabis, saying it aimed to rebalance a market that “appears to be stacked in favour of the provider rather than the consumer”.

Last year the company told potential investors that it sees a “significant opportunity” to expand the customer base of Saga Law.

Saga’s marketing director, Amanda Hoskins, said: “The campaign raises awareness of Saga shaking up the legal market, by offering a service which, amongst other things, is simple and straightforward. We have worked hard to make them clearer for our customers.”

David Boscawen, group MD of advertising agency VCCP, which was behind the campaign, added: “People find legal services complex and hard to understand but they do have an inherent trust in the Saga brand to deliver a great service at a fair price, and we wanted to reflect this.”