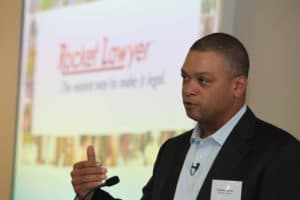 Moore: legal services are too expensive

Online legal services business Rocket Lawyer is expanding into continental Europe on the back of its success in the UK to date, which has seen nearly 200,000 people sign up to the service and create more than a million documents in less than four years.

Rocket Lawyer is launching first in France, with Spain and Holland to follow shortly. In two years’ time it expects to have covered 80% of the EU.

It has joined forces with leading European legal publishing company Editions Lefebvre Sarrut (ELS) for the expansion. ELS joins Google Ventures, Morgan Stanley Ventures and Swiss bank Salfort Privatbank among others as investors in the business.

Rocket Lawyer delivers online legal documents and allows users to ask questions of its panel of ‘on call’ lawyers. Subscribers pay £25 a month. Should they go on to instruct the lawyers, they receive a discount as part of their membership of the service.

A US-based business, Rocket Lawyer opened in the UK in November 2012 [2]. Charley Moore, the founder and CEO of Rocket Lawyer, told Legal Futures that since then, it has racked up nearly 200,000 account holders and 1.1m document creations, and has 110 lawyers in its ‘on call’ network able to answer thousands of questions a month.

He said the UK arm now employs 20 people and was “getting closer” to being profitable.

Though originally Rocket Lawyer had about 20 firms on its panel, this has been whittled down to six with which it currently works closely after they proved they could deliver “affordable, responsive and quality” services.

The firms pay nothing to Rocket Lawyer, but have to answer questions put by users and offer discounted services to them. Mr Moore said that as the company grew, he “full expected” to work with more firms.

He declined to say how many users actually end up instructing one of the firms, but said it was increasing.

Mr Moore described France’s legal market to being in a similar position to how the UK was four years ago; and across Europe, he said, there was the same basic need – “in market after market, legal services are too expensive”.

“Our mission is to make high-quality legal services affordable and simple for everyone, regardless of where they live or how much money they have to spend,” he added.

ELS chief executive Dominique Illien said: “Our new European service is good news for consumers and lawyers alike. Consumers will now be able to access legal help at a cost they can afford. At the same time, lawyers will have a new and efficient way to reach clients that they otherwise would have been unable to serve. Ultimately, Rocket Lawyer is increasing opportunities for lawyers to reach more clients.”