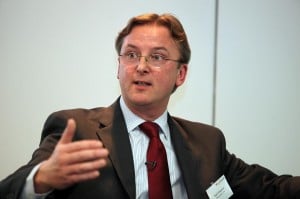 Riverview Law, the combined law firm and barristers’ chambers that sells fixed-fee advice to businesses, is to shift its strategy of organic growth to one of acquisition to meet unexpected demand just two months after it launched.

Chief executive Karl Chapman revealed the turnaround at the Legal Futures conference, sponsored by NatWest, in London yesterday. He said Riverview, the brainchild of potential alternative business structure (ABS) LawVest, which counts City law firm DLA Piper among its investors, has been stunned by the positive reaction to its offering and needs to move quickly to capitalise on the opportunity.

“We are shocked by the traction we’ve achieved at the large corporate level in terms of businesses who are buying our services. The opportunity is much bigger than we’ve ever thought, by a long way.

“If you’d asked me six months ago I would have said there was no chance under any circumstances we will make an acquisition – we are going to do it organically. I can now tell you with absolute certainty that we will be making acquisitions.

“The reason we are doing that is that the opportunities are much bigger than we anticipated and we want scale quicker… We’re re-focusing rapidly and re-prioritising our activities quite significantly in terms of where we see the opportunities.”

Mr Chapman said another unexpected reaction was the “stunning” volume of job applications Riverview had received in the 43 days since the venture went live. These had come from “real quality people, all the way through from customer services and IT at one end to senior lawyers in large organisations who, quite frankly, want a change of scenery”.

Mr Chapman insisted the business was “doing nothing clever” that could not be done by other organisations and predicted it was only a matter of time before it would face competition from like-minded businesses. Legal advisory outsourcing by large organisations in particular was “a trend that’s inevitable”, he said, adding: “It’s coming quickly.”

Companies were increasingly questioning the value they received from law firms and would use ever more sophisticated techniques to measure it, he predicted. The advent of fixed prices meant that the “procurement function in large corporates will finally get their hands on a spend that they haven’t been able to get their hands on for many years”.

Asked whether Riverview Law’s business model included insurance to cover occasions where demand under fixed-price, unlimited advice contracts went “over the clock”, Mr Chapman said the firm accepted liability and managed the risk. But he would not rule out an “insured proposition” in the future.

He pointed out that an annual contract model limited the firm’s exposure to businesses that used its advisory services extensively to 12 months. It was therefore open to Riverview to renegotiate a renewal on revised terms.

Mr Chapman concluded that some large and mid-tier law firms “have been unbelievably complacent” by failing to focus on small businesses and that this left them vulnerable to competition from new entrants. “I think they may be stunned by the pace at which some of their core activities are attacked,” he said.

Asked whether there was anything he would take from the traditional law firm model, he replied simply: “Their clients.”