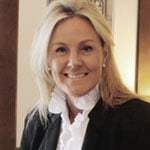 One of the first barristers to receive authority from the Bar Standards Board (BSB) to conduct litigation has said her fixed-fee direct access business has been so successful she plans to license the venture to other barristers.

Amanda de Winter, a barrister at No.6 Fishergate chambers in York and Sheffield, has so far opened offices in Harrogate and Wetherby under the barristersandco.com brand, as well as operating from the chambers in York.

Ms de Winter, who was called in 1998, is one of 15 barristers the BSB confirmed had so far applied and been granted the right to conduct litigation since it became an option at the beginning of January. Under the new code of conduct, for the first time self-employed barristers have the opportunity to compete directly with solicitors in managing litigation on behalf of clients from start to finish.

Ms de Winter told Legal Futures her high street offices had been “fantastically successful”, so much so that she planned to outsource back office functions. “We’re actually going to roll it out by licence so that barristers will be able to come on board. We will be able to give them exclusivity for various areas and do all the bits that solicitors do… underneath.”

She used radio advertising and made it explicit to customers that barristersandco.com provided an end-to-end service without solicitors, after initially being cautious. “At first I wasn’t saying ‘no need to instruct a solicitor’ because obviously there’s been this big hoo-ha about insulting solicitors, who then withdraw instructions… but frankly we’ve got past that stage and I think [solicitors] are just going to have to learn to live with it. Now I do say ‘no need to instruct solicitor’.”

She said members of the public particularly liked fixed fees and the fact that she was accessible. “Clients can’t believe that they can actually speak to a barrister. I’m here most of the time, so if somebody walks in, they speak to me.”

She continued: “People are afraid to go to solicitors because they’re frightened to make calls about their case and that every letter is going to incur an extra charge, whereas with us under a fixed fee it doesn’t matter.” Far from this privilege being abused, she said, “it’s almost worked in reverse, because they can be relaxed about that now”.

The unique selling point that has underpinned the business’s success is that the opportunity to instruct a barrister resonates with the public, said Ms de Winter. “I think the thing that they like is the fact that we do [the case] from start to finish and there’s not going to be a change halfway through. The barrister they talk to at the beginning is the barrister that is going to do the hearing.”

Ms de Winter said there was little appetite for risk-sharing with lawyers among the public, and people were content to pay the fee up-front in exchange for certainty of price. For clients who had trouble paying for litigation, the practice offered unbundled services where “you do the paperwork to keep your costs down that way. We will guide you through and you just cover the fee for the hearing”.