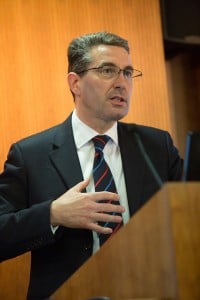 Philip: not aware of any evidence of systematic failings

Barristers’ call for a review of the standards of solicitor-advocates’ work in family cases has been received coolly by regulators, who have told Legal Futures they have seen no evidence of the kinds of problems that would justify an investigation.

Last week, a joint letter from the Bar Council and Family Law Bar Association to justice minister Shailesh Vara argued that “serious damage” was being caused to the public interest as the standard of representation being provided by solicitors without counsel “in many cases is so poor that unjust outcomes have occurred”.

Ultimately any reforms – such as a quality assurance scheme for family advocates akin to that being introduced for criminal law – would have to be implemented by the regulators.

Solicitors Regulation Authority chief executive Paul Philip said it was “not aware of any evidence of systematic failings in the quality of advocacy in family cases”.

He continued: “If those sitting on the bench do have any concerns about the advocacy provided by individual solicitors in any courts, we would expect them to refer the matter to us for assessment and investigation in the usual way.

“In the absence of that information, we are not currently considering the introduction of a quality assurance scheme for family advocacy. We would of course review our regulatory arrangements if we receive evidence of widespread difficulties.”

A spokesman for the Bar Standards Board said: “We have noted the recent call from the Bar for the Ministry of Justice to conduct a review of advocacy in publicly funded family cases. Whilst we have no immediate plans to undertake a review of the standards of family advocacy, we will consider any evidence suggesting systemic risks of harm to the public and the regulatory objectives.

“This consideration will then enable us to decide where the issue would fit in our list of priorities and what, if any, action needs to be taken by us as a result.”

A spokesman for CILEx Regulation added: “Frontline regulators, rather than the professional bodies, are best placed to speak about the quality and competence of their regulated communities, and we have not seen evidence of complaints about our advocates or any change in the numbers of complaints about family practitioners generally.”

Solicitors last week strongly rejected the accusations from the Bar, while Mandie Lavin, chief executive of the Chartered Institute of Legal Executives, argued that “airing disagreements over which profession delivers advocacy better is to overlook the broader principle – skills, ethics and competency are what matter, not how you enter the profession or what professional title you have”.

She said: “Whether instructed by the public or by a fellow lawyer, all advocates must be trained and skilled for the task, and must work hard to win the confidence of all involved. Public hostility does not help to win this confidence, and we must not fall into the trap of short-sighted protectionism.

“Barristers, solicitor-advocates and chartered legal executive advocates must work in unity for the benefit of the public, our system of justice, and our combined legal profession.”