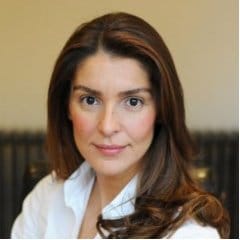 Our series catching up with the new breed of alternative business structures (ABS) profiles Red Bar, the first start-up ABS and a law firm offering early access to barristers.

Red Bar, which launched in July 2012 [2], has continued its impressive year-on-year growth, reporting a doubling of turnover after its second year as it did after the first, maintaining a profit margin of 70%.

The firm, created by solicitor John Esplen and business consultant Hatice Suvari, offers fixed-fee advice either on a one-off basis or by seconding barristers to corporates, including their in-house teams. Last year it announced it had achieved a turnover of £200,000 [3], far exceeding an initial turnover of £75,000.

Its client base includes the BBC and Iranian British entrepreneur Vincent Tchenguiz. Mr Tchenguiz and his brother are seeking £300m damages against the Serious Fraud Office for losses after a botched arrest and investigation.

Ms Suvari told Legal Futures that Red Bar had expanded its corporate client base through secondments and had grown that aspect of the business “massively”.  The ultimate target was “to second 1% of the Bar – 150 barristers a week”. But she would be content “if by this time next year we can get to 50 barristers consistently seconded five days a week”.

She put Red Bar’s success down to “hard work”, value for money, and to the fact that it had stuck to its launch principle of requiring two-weekly up-front payments from clients, which meant it could pay barristers within 24 hours for their work.

“The way I see it, we are not debt collectors, we don’t want to do the work and then argue about what we’ve charged is worthy of it or not. We always said that this was our core business, servicing corporates, and saving them money, and getting barristers good work where they are paid promptly, and we’ve stuck to that.”

Ms Suvari said the Red Bar strategy had not been replicated. “Nobody is doing what we’re doing as an ABS or as any other law firm. Nobody is approaching corporate clients and saying ‘look, I can reduce your day-to-day legal bills, or your legal spend, even with your in-house’, because we are creating in-house teams for corporates and we’re adding to teams for corporates.”

Asked why no-one else had attempted to copy the model, Ms Suvari said she couldn’t say, but pointed out that Red Bar had “first mover advantage” and had established relationships. It would be hard for a rival to enter the same market, she suggested. “I wish them the best of luck…”

She stressed that Red Bar was a “boutique law firm” and not “just a recruitment agency”, that “worked hard to deliver value to large corporate clients” and went far beyond putting “bums on seats”. She added: “We provide our clients with weekly bullet point reports of what has been carried out by our teams, we manage all the monies, the diaries, we manage the barristers.”

Proof that the model  is a success could be seen in the quality of clients Red Bar was attracting, she said. “Vincent Tchenguiz and his case is an absolutely huge litigation case, one of the biggest in town. He’s a very tough man to please and you really wouldn’t be part of that gang if you weren’t saving him money and bringing very bright, hard-working people to the table at very good rates.”

For their part, barristers were happy to put themselves forward. “We are using anybody we want and we’ve never had a barrister saying ‘I don’t want to work with you’, because they get paid so promptly.”

Commenting on the way barristers embraced a way of working with a business that departed from the ‘old’ model of the traditional solicitors’ practice, Ms Suvari said she perceived business-savvy attitudes were now more pervasive among barristers and that this affected “the older generation as well as the new blood”. Even a very senior barrister “wants good work and he likes the fact that he gets paid. He might [have to] shave a few pounds off what he would normally charge, but he knows that it is guaranteed money”.

While agreeing that customer service was now generally taken seriously across the profession, she said that accessibility should not be confused with delivering the right quality of work. “For me it’s about choosing the right barrister for the job and making sure that the barrister not only has the right to legal expertise, but also has the right personality, character, that suits their client …

“You could be available on the ‘phone all day and every day – as we are – but that doesn’t necessarily mean you are delivering a good customer service. I think it’s the quality of the work that determines the level of customer service. It’s not just ‘I’m available any time and I respond within minutes’, and all of this jazz; it’s actually delivering at a level which is required by the customer, at the right cost.”