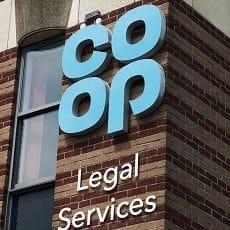 Co-operative Legal Services (CLS) has been fined nearly £144,000 for recovering more costs in personal injury claims than it was entitled to.

It is the largest fine the Solicitors Regulation Authority (SRA) has handed out to an alternative business structure (ABS), against which it has far greater fining powers than traditional law firms.

Bristol-based CLS recovered £28,777 in relation to medical disbursements from third-party insurers in breach of the indemnity principle.

This fell foul of principle 6 of the SRA Principles – maintaining trust – and of the rule requiring it to establish and maintain proper accounting systems, and proper internal controls over those systems.

CLS said it accepted the SRA findings and has been “committed to resolving this error”.

A CLS spokeswoman explained: “We entered an agreement with a medical disbursement supplier which entitled us to a discount for medical reports.

“The accounting issue resulted in us accidentally billing the full rate, claiming more than we were entitled to on individual cases. The error wasn’t initially discovered as the individual amounts were minimal and no clients faced a loss as a result.

“As soon as the extra claim was identified, we refunded the overpayments in full.”

The SRA said the CLS had acted recklessly in not considering the impact of the agreement on its processes and procedures.

The spokeswoman said there has also further staff training and changes to the company’s systems to avoid a recurrence.

“We have a strong track record of compliance with the SRA with no previous disciplinary history,” she said. CLS will also pay costs of £1,350.

The case illustrates the difference between the SRA’s powers to deal with ABSs and traditional law firms.

To impose any fine above £2,000 on traditional firms, the SRA has to refer them to a disciplinary tribunal. However, it can fine ABSs up to £250m (and £50m for individuals working in ABSs).

The fine was based on CLS’s turnover, although the exact calculation has not been revealed.

The SRA has long been lobbying to extend the ABS fining power to all law firms it supervises.