Rebuke for partner who took trainee to strip club 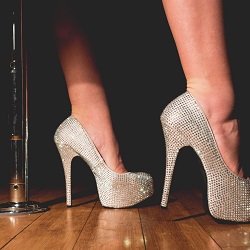 Strip club: Partner and trainee did not know where they were going

A male City partner who added to a female trainee’s discomfort at being taken to a strip club during a work event by putting his arm around her waist has been rebuked by the Solicitors Regulation Authority (SRA).

The regulator said Peter Walmsley “failed to have sufficient regard for the wellbeing” of ‘AB’ and so “caused her to experience discomfort and distress”.

He was head of large loss and catastrophic claims at Clyde & Co at the time of a work event in November 2017 attended by senior staff and clients. It began at a Christmas market and moved on to a number of bars.

In a notice published yesterday, the SRA recounted that some left at around 10pm but a group of six – AB, Mr Walmsley, two male senior associates and two clients, one of whom was female – went on to a strip club.

“Neither Mr Walmsley nor AB realised the nature of the club until prior to entry. Mr Walmsley was also unaware that AB had even entered the club until he saw her inside. He did not ask or encourage her to go to the club, he had not visited the club before, and it was not his choice of venue.”

The notice said AB was “immediately uncomfortable”, but felt obliged to stay for a short time, “primarily because she did not want to embarrass the clients of the firm”.

“There is no suggestion that Mr Walmsley paid for a private dance or interacted with anyone outside of the immediate party. She was not pressurised to stay by Mr Walmsley.”

The group was seated at a booth, with Mr Walmsley sitting close to AB. “At one point, and without prior warning, Mr Walmsley placed his hand around her waist. This was done openly, and without any improper or sexual motivation on his part.

“However, this was unwanted by AB and it compounded her discomfort… AB felt unable to challenge Mr Walmsley’s unwanted behaviour because of his seniority and the presence of clients. She moved away from Mr Walmsley because she felt uncomfortable with his arm around her.

“When she returned to the booth area, Mr Walmsley put his arm around her waist again (and, again, there is no suggestion that he had any improper or sexual motivation in doing so). After having another drink, AB left the club.”

The SRA said the solicitor was “unaware at the time” of AB’s discomfort, and that his arm around her waist was unwanted.

AB experienced, and subsequently received treatment for, anxiety, which she attributed partly to the incident.

Mr Walmsley admitted that he ought to have taken “reasonable steps” to ensure AB was not “discomforted and/or otherwise adversely affected by the nature of the venue”, to ensure her wellbeing and welfare were not placed at risk by her presence there, and to ensure his actions did not exacerbate her feelings of discomfort.

As a result, the SRA found that he failed to carry out his role in the firm in a way that encouraged equality of opportunity and respect for diversity, and in turn damaged trust in the profession.

In mitigation, Mr Walmsley – who is now a partner at insurance law Horwich Farrelly – said he apologised to AB as soon as he discovered that she had felt uncomfortable, and pointed out that “the progression of the evening was unplanned and the choice of venue was inadvertent”.

“Like others that night, Mr Walmsley had been drinking but has since taken action to prevent his behaviour from being detrimentally impacted by alcohol when in the presence of colleagues or staff.”

It concluded: “A rebuke is appropriate to uphold the public confidence in the solicitors’ profession and provision of legal services. Any lesser sanction would not provide a credible deterrent to Mr Walmsley and the wider profession.”

“During his time here he has performed with impeccable conduct and with the full support of his team and clients who were made fully aware of the facts.

“Horwich Farrelly take issues of this nature very seriously and agree with the SRA findings that Peter should not have put himself or others in this position. The SRA has noted that there was absolutely no intent from Peter on the evening in question to attend a club of that nature, and there was no sexual or inappropriate motive or intent behind his actions.

“Immediately after the event, and in the years since, Peter has shown that he has taken the matter extremely seriously and regrets the incident wholeheartedly.

“He has focused on his personal development to ensure he always puts the wellbeing of every team member first, in every situation. It is due to his constructive approach since the event that Horwich Farrelly believed he deserved the chance to further his career.”