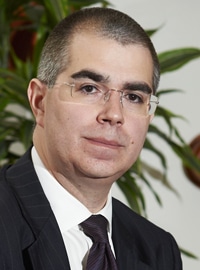 Alternative business structure Quindell plc suffered another day of dizzying collapse in its share price on Tuesday, with a second consecutive 20% fall.

As concern over the continues, the AIM-listed legal outsourcing business has now lost more than half of its value in just three weeks.

The share price has been in freefall for much of the last six months, during which there was a 15:1 share consolidation, making comparison with earlier in the year harder.

However, analysts put the share price as being the equivalent of around 650p when it was riding high at the start of 2014, before the consolidation. But it has not recovered since being hit in April by the highly critical report on Quindell by little-known American analysts Gotham City Research.

A stream of announcements from the company about directors buying more shares as a display of confidence – just yesterday, chairman Rob Terry bought another 250,000 at 97p – has been unable to stem the sharp recent slide first below 150p and now below 100p.

The confusing nature of Quindell’s stock exchange announcements are unlikely to have helped. In trying to clarify the nature of the finance arrangement that saw three directors, including Mr Terry, hand over shares to Equities First Holdings (EFH), an announcement on Monday was unclear as to whether EFH might sell the shares.

But then a quote from Mr Terry said: “In entering into the sale and repurchase agreements to provide finance, each of us purchasing directors relied upon assurances from EFH that, notwithstanding EFH’s legal rights, the custom and practice of EFH was that the shares transferred would not be disposed of outright, other than in a default event.”