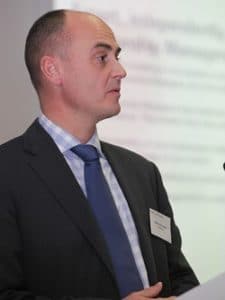 There have been some significant thefts from client accounts in recent months, with one in four SME law firms having suffered a cyber-attack or fraud related loss in the last year, according to new research by NatWest.

The poll of 269 firms also showed that income and profit continues to rise, although cash remains an issue – the average firm surveyed would run out of cash after just 40 days if new work dried up.

Of the 24% of firms found to have suffered a cyber-attack or fraud-related loss, larger firms were more likely to be targeted, the survey found.

There were also regional variations, with the north-east and north-west experiencing this in 37% of firms, while in Scotland just 9% of firms were affected.

The NatWest Legal Benchmarking report, now in its fifth year, is mainly focused on firms’ financials and highlights the significant regional differences in their performances. Across all the firms, the median fees generated per fee-earner dropped 5.6% to £136,000.

Author Robert Mowbray, an accountant and consultant, wrote: “This represents a surprising drop given that the fee income being generated by firms is rising. This would then suggest that perhaps firms are too quick to take on new staff rather than thinking about how the productivity of existing staff could be improved.”

The report found that gearing has increased, and was also reflected in a 12% increase in fees generated per equity partner, to a median figure of £539,000.

The flip side was the finding that considerable chargeable time was being lost. The overall median figure of 866 hours per fee-earner equates to 3.9 hours per working day.

“This does not tally with how most fee-earners tell you that they are working hard on client matters for most of every working day and that this often continues when they leave the office as it is increasingly easy to work remotely with the help of technology.”

Mr Mowbray said one possible explanation was that fee earners were still nervous about recording all of their time because they worry about the prospect of increased write-offs.

“While the man in the street would say that £120,000 is a great deal of money, it should be remembered that this figure covers the salary of the equity partner for doing the job and the profit being earned from the business.

“One can argue forever about what is a fair salary for an equity partner but once this figure has been deducted from the profit per equity partner figure, the resultant true profit figure suddenly looks far less impressive in the vast majority of firms.”

Lock-up reached the highest level in the five years of the survey, 113 days. The report said: “Traditionally as firms get larger, they find it increasingly difficult to manage lock-up and the results hold true to this with the median lock-up for small firms being 84 days… and for very large firms 142 firms. Without a constant flow of new matter starts and paid fees, the results show that firms would on average run out of cash within 40 days.”

Steve Arundale, head of commercial professional sectors at NatWest, said: “The legal sector is confronted by many challenges, from the rise in cyber-related crime to the increasing difficulty in managing lock-up.

“However, year-on-year PEP continues to improve and the 2016 performance is 33% up from 2013. Fees have also grown 5% which is still considerably above inflation.”

He told Legal Futures that firms were generally on a firm financial footing, but their balance sheets – while improving – were still not as strong as they could be.

He added that the figures for recorded time indicated that firms should look to get more from their existing staff before looking to recruit.