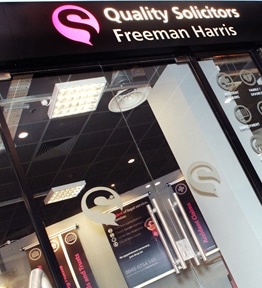 The next stage of QualitySolicitors’ (QS) latest advertising campaign to persuade the public to love lawyers went live yesterday with a series of television adverts.

Following on from press and digital advertising last month, the national law firm network has put out six TV spots, three of which highlight how QS can make conveyancing, divorce and writing a will easier for the client, and the other three covering elements of the service: Saturday opening (see below), plain English and free initial advice.

Each advert features a client leaving a QS office and explaining to the camera what they had just experienced, saying “I wasn’t expecting that”. They continue by saying “and I wasn’t expecting this”, pointing to an ‘I love my lawyer’ badge on their lapels. A voiceover concludes: “QualitySolicitors – changing the way you see lawyers.”

When the campaign first launched last month, the group said that following consumer research and feedback from clients, it wanted “to change people’s perceptions with a campaign that shows it is possible to find legal services that are approachable, jargon-free, and available when you need them”.

QS said its client research found that whilst lawyers tend to be excellent at carrying out the technical aspects of the job, concerns around expense, use of jargon and the time it takes to respond “can make a visit to a solicitor an intimidating and often last resort prospect”.

Costing more than £1m in the launch phase, the firm used M&C Saatchi to create a series of adverts, which started with one on personal injury. Yesterday’s advert (see below) dealt with employment law.

The adverts are airing in a mix of peak and off-peak time slots – split about 60/40 in favour of peak times – across a range of channels, including ITV and Channel 4.

The advert takes the viewer on the journey from the start of a legal problem to a successful resolution. The TV campaign is being supported by print advertising and digital activity through search and pay per click.