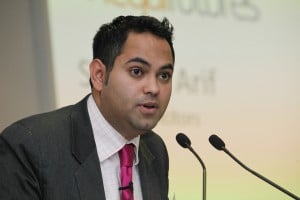 Arif: QS now by some distance the most well-known legal brand in the market

QualitySolicitors (QS) has admitted its campaign of attack ads on ‘faceless’ legal advice may have been premature, but defended it on the grounds that the network’s solicitors wanted the message publicised.

Speaking at the Legal Futures conference in London, QS’s chief operating officer, Saleem Arif, also said the company’s tie-up with WH Smith had yielded “mixed” results and that its national TV advertising campaign had made QS by far the best-known legal brand in the marketplace. He pledged to maintain the momentum in 2013.

Asked whether the attack ads – launched last month to differentiate QS’s network of traditional high street law firms from consumer businesses entering the market – were premature on the grounds that the public are not aware that banks and supermarkets could offer legal advice, Mr Arif conceded: “It is true that it’s possibly slightly early.”

But he insisted the campaign had raised an issue “which we felt was becoming more and more important to local solicitors”. His members had wanted to see QS underlining that legal services consumers “want somebody they can meet face-to-face; not everyone wants the cheapest possible deal or wants to deal with their legal issue through a call centre – they want somebody who they know and trust and who can empathise with their particular issue”.

He continued: “I think the campaign achieved that… it was something that we felt would become more and more apparent to people with every new non-legal entrant coming into the market.”

Mr Arif said the deal to place legal access points (LAPs) in WH Smith stores had been a “mixed bag”, adding: “In a majority of cases I think it has worked well where firms are getting a lot more traction in terms of creating awareness for themselves, generating appointments.

He said QS’s October 2011 with Palamon Capital Partners had enabled the TV advertising campaign which had made QS “now by some distance the most well-known legal brand in the market”. Next year the company would seize “the opportunity to really grow that branding and that marketing exponentially”.

The Team Saatchi-designed campaign, launched in May, had produced some “very impressive results”, said Mr Arif. The TV ad was viewed by more than 2m people on YouTube, which was “unheard of for legal services” and the soundtrack “managed to make the iTunes top 40”. The advert was “one of the most talked about this year on social media”.

The Palamon deal had brought to QS valuable expertise in professional services, as well as the funding “to spend whatever is necessary to make QualitySolicitors the dominant player for legal services in the UK”.

He highlighted the experience derived from Palamon’s investment in Integrated Dental Holdings, a group of hundreds of independent dentists’ practices. The investor had “used economies of scale to slash costs and… centralise a lot of those back-office functions, making those dental practices considerably more profitable than they were before”. He indicated that a similar approach is likely at QS.

A spin-off benefit of the investment was that the network’s member firms “are looking at us very differently”, said Mr Arif. “I think it’s given firms a lot more confidence that we’re able to compete… and it’s having a real knock-on effect in terms of the types of firms that are expressing interest in coming on board.”

He claimed that firms that were market-leaders in their towns and were “not unsuccessful or struggling in any way” were approaching QS because “they realise that there are huge advantages to combining forces with other firms in other areas of the country to enable them to grow and to dominate their local market”.