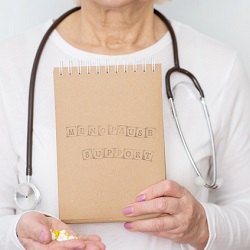 Menopause: Vital for women to speak out

A QC has described how going through an early menopause at the age of 37 made her feel she was “losing her mind” and left her a “hair’s breadth away” from leaving the Bar.

Lyndsey de Mestre, a commercial silk, said she was concerned she could be suffering from early onset dementia, but hormone replacement therapy (HRT) had provided a “100% cure”.

Ms de Mestre, based at 24 Old Buildings, said that by the age of 37 she had already been struggling with “severe symptoms of peri-menopause for four years”.

She suffered an “enormous amount of doubt” about “whether I was losing my mind or had early onset dementia”, and became “really, really anxious” about her job.

Speaking at a Chancery Bar Association webinar on menopause and the Bar, Ms de Mestre, who is advising the Bar Council on the issue, said she was concerned that other women were leaving the Bar because of the menopause or “soldiering on and just scraping by”.

She said her symptoms resulted in a “massive loss” of self-confidence.

“I put myself on mute. I lost confidence in my ability to hold an intelligent conversation, to go to court, to be accurate, to remember people’s names. It left me feeling pretty dispirited and depressed.”

She was a junior barrister with two young children when she started getting symptoms. When she found out what her problem was, she did not share it with anyone at chambers.

Now 45, Ms de Mestre said she had been concerned by the perception that the menopause was “about older women” and had heard references to it, such as “she’s going through the change”, which put women down.

“I didn’t ask for help. I wish I had. I would have benefited from being open about it.”

The part of her career least affected by the menopause was her work at court, where she felt “more comfortable than anywhere else” because of the “massive dose of adrenaline” she got from it.

Ms de Mestre “put a lot of emphasis” on her court work, joining a government panel where she knew she would get a lot of advocacy, and which ultimately helped her to become a QC.

Brie Stevens-Hoare QC, a property silk and co-head of Hardwicke Chambers, said she had been living with peri-menopause or menopause for over a decade with “some help” from HRT.

She said she did not have hot flushes, and instead her temperature “went up and stayed up”. She said GPs often “did not get it” about the menopause and it was important to see a specialist. In her case a blood test confirmed she was peri-menopausal.

Ms Stevens-Hoare said her symptoms included “brain fog”, memory loss and an inability to concentrate. She told her practice manager that she needed all her energy for legal work, rather than administrative tasks.

“They stepped up in reminding me much more often where I needed to be and what I needed to do.”

Ms Stevens-Hoare said she found going to court was the most difficult part of her job, where she felt “most exposed” and least able to rely on her normal coping strategies.

“You become acutely self-conscious. Can everyone see that I am red and the sweat is dripping off me?”

The QC added that it was “vital” that people spoke about the menopause and through education that everybody became more aware of the issue.

There has been an increasing focus on the impact of the menopause on female lawyers over the past year.

Last September, the Law Society issued guidance [1] on experiencing menopause in the legal profession, while a launch event for it heard concerns from women [2] about the impact it can have on meeting their billing targets.

See also: Why we have to talk about the menopause [3]