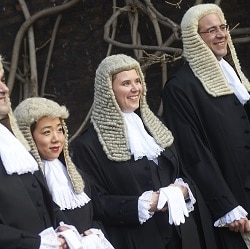 Changes to the QC appointment regime aimed to help women apply for silk are to be introduced for the 2019 round, the body in charge of the scheme has announced.

However, it has decided against introducing social media trawls or other activities that would extend the extent to which unsatisfactory behaviour outside the field of advocacy not amounting to professional misconduct is taken into account.

QC Appointments (QCA) – run by the Bar Council and Law Society – has published its response to two consultations published earlier this year, one on the listing of cases and assessors, and the other on character, conduct and integrity.

It is to change the requirement that applicants should list eight judges or arbitrators, six fellow advocates and four clients as prospective assessors.

Instead, where possible, they should list as potential assessors a judge, practitioner and client from each of their listed cases.

QCA gave two main reasons for this: “First, although there is no requirement to do so, under the present arrangements it is commonplace for applicants to ask assessors in advance if they are willing to provide an assessment.

“This enables applicants to get a sense of whether the assessor is likely to provide a favourable assessment – any reluctance to provide an assessment being interpreted as a discouraging sign.

“That practice may disadvantage prospective women applicants who (according to independent research carried out for QCA) are typically more reluctant than male applicants to ask judicial assessors in advance if they are willing to provide an assessment.”

Applicants will still be entitled to nominate an assessor in each of the judicial, practitioner and client categories, with the guarantee that the selection panel will seek an assessment from the nominated assessor.

QCA has decided not to proceed at this stage with the proposal that applicants should be expected to list all their cases of substance over a prescribed period, rather than to select 12 cases to list.

“The preponderant view from those responding to the consultation paper was that that proposal would have a deterrent effect on prospective women advocates, because it would be understood as expecting applicants to list more cases than at present.

“Since a higher proportion of women than of men have difficulty in listing 12 cases of substance, this proposed change was thought likely to disadvantage prospective women applicants.”

On the second consultation, QCA is to widen the definition of various competencies to ensure it is clear that they encompass a requirement to act cooperatively with the court and their opponents.

It will also amend the ‘integrity’ competency to make clear that it is concerned primarily with matters of professional misconduct.

The consultation sought views on the extent to which unsatisfactory behaviour beyond advocacy and which attracted neither criminal nor regulatory sanction should be taken into account – such as in social media postings – and whether heads of chambers or senior partners should be asked whether there was anything in the applicant’s conduct which made him or her unsuitable for appointment.

But in light of the response, QCA will not make any changes: “The general view from those responding to the consultation was that although there were some advantages from widening the range of those from whom input was sought on each category, the risk of that leading to unfair prejudice to some applicants outweighed the potential benefit.”

QCA will also not seek to widen the grounds on which existing QCs may be at risk of having the designation removed. It has happened only once this century, in the case of a QC who was jailed.