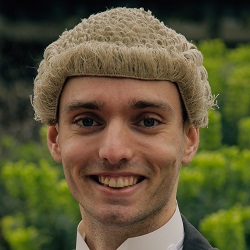 March: Other barristers like to cop a feel of his wig

A QC is among the first buyers of a new hemp wig, made without the traditional horse hair and developed by vegan barrister Sam March.

Mr March made news a year ago as a pupil after creating what was thought to be the first vegan barrister’s wig and he has now set up a website to sell them.

He said buyers of the wigs were “surprised how lightweight they are”, with a softer feel, and none of them had found the hemp wigs itchy – a familiar complaint about horse hair.

The new wigs have been “causing a lot of curiosity” in robing rooms, with barristers asking to feel them and commenting on the fact they were “less bristly and more stringy”.

Mr March, based at 9 King’s Bench Walk, said the buyers were students finishing Bar school and pupils finishing pupillages, most of whom were vegans, but they included a QC, Jamie Burton.

Mr Burton said: “Lighter than its horse-hair equivalent, Sam’s wig has offered nothing to the quality of my submissions but definitely makes me perspire less in the face of an unpersuaded judge. And it causes no harm, so I’m doubly grateful to Sam for his ingenious invention.”

Mr March said he had “never had any negative comments” about the wig from judges, and people looked at it closely often compared it to an older traditional wig. “Nobody has said it is inappropriate.”

The wigs, which are made in England by a “master craftsman”, cost £600 plus VAT, and as a result Mr March said it was “not a question of mass production”.

Since October he has been a barrister at 9 King’s Bench Walk, specialising in crime, regulatory work and animal rights cases.

He believed the wigs would appeal mainly to the small number of vegan barristers.

“There should not be barriers to accessibility for any group of people at the Bar and this is one way of solving the problem.”

Meanwhile, the case of Michael Etienne, a Black barrister who has Afro hair, has triggered a debate about whether barristers should be obliged to wear wigs in court.

Mr Etienne said he was warned about contempt of court if he did not wear a wig and wrote to the Bar Council.

The barrister, a public law and human rights specialist based at Garden Court Chambers, tweeted the response he received, which listed potential issues of contempt of court and code of conduct breaches unless the requirement to wear a wig was discriminatory.

Matthew Ryder QC, commenting on Twitter, said he did not understand why “some barristers love wearing wigs”.

Mr Ryder, based at Matrix Chambers, went on: “It not only causes some to feel absurd, at worst the absurdity sends a subliminal message about the Bar: people with Afro hair are not what a traditional, ‘proper’ barrister ‘looks like’. (Otherwise they wouldn’t look so odd in the all-important wig).

“I’m not saying every black barrister feels that way about wigs. But if a significant number do, we need a pretty good reason to force people to have to wear wigs when they feel it makes them look ridiculous. And there isn’t a good reason. So what’s the solution? Choice.”

He added that solicitor-advocates could choose whether to wear a wig, and the same should be the case for barristers.

Another Black QC, Leslie Thomas, told The Times that wigs looked “ridiculous” on Black advocates, dismissed the justifications for them as “nonsense” and called for wigs to be scrapped completely.