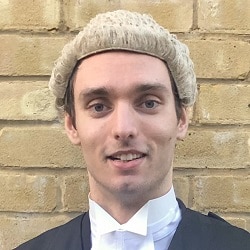 A pupil barrister and animal protection activist has created what is thought to be the first vegan barrister’s wig, made from hemp rather than horse hair.

Sam March said he considered the thought of wearing a plant so closely related to cannabis into the criminal courts to be “delightfully disruptive”.

He is a pupil barrister at 5 Paper Buildings and will be on his feet for the first time next month. He also volunteers with Advocates for Animals, the UK’s first specialist animal protection law firm, having worked there as a paralegal during his Bar studies.

He said: “As a vegan, I oppose all forms of animal exploitation, from gratuitous cruelty like bull fighting or fox hunting, to the industrial-scale cruelty of factory farming, to more subtle forms of cruelty which nevertheless involve the ownership and commodification of animal bodies.

“For me, horse hair is at the latter end. Of course, it is conceivable that there are ways this could be taken without immediate physical pain, but that does not mean it is not exploitation.

“I refuse to sponsor exploitation by buying expensive items made from animal products as this adds value to the practice of owning them and selling them for parts.”

Mr March said the only vegan wig option he knew of was synthetic, but he had “not heard positive things” about it and in any case it would have to be shipped from Australia. “As someone who no longer gets on planes, I wanted to keep things as local as practicable.”

He also felt the symbolism of the wig would be lost with a synthetic version.

Hemp was actually Mr March’s father’s idea – “he is an artist… and a bit of an aging hippy” – and he worked with hemp designer and supplier Laura Bossom to create the wig; hemp is one of the strongest natural fibres in the world.

Currently the wigs are being individually handmade by a master craftsman in England and will cost around £650, more than a traditional wig. Mr March said: “My aspiration is to make these as accessible as possible and we are discussing processes and economies of scale moving forward.

“It will be a balancing act of keeping things high quality, local, sustainable and ethically sourced. Whatever I can do within those parameters to lower the price I will.

“I will not be taking any profit personally, but I do hope to be able to raise some money for a cause related to helping animals.”

Ms Bossom said: “I really like the idea of long-lasting resilient and sustainable hemp wigs. I like the image of them being passed down to incoming pupils by retiring barristers, leaving a legacy behind of a wig which won’t pollute the planet or harm any animals.”

Edie Bowles, co-founder of Advocates for Animals, said: “It is very important that those with vegan beliefs are able to access products that align with their values. Sam has now paved the way for other barristers in need of animal-free courtroom attire.”

Mr March explained that he went vegan at the end of 2017. Having previously worked in marketing, he applied to law school at the same time.

“The two changes in my life very much go together. They arose out of a considered decision to try to do less harm and more good.”

To enquire about the wigs, email Mr March at: samuel.march@cantab.net