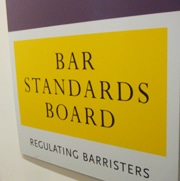 BSB: no link between ethnicity and external complaints

Barristers specialising in professional negligence are more likely than colleagues in any other area of law to generate complaints, a report by the Bar Standards Board (BSB) has found.

The report also found that when factors such as area of work and gender were taken into account, ethnicity “no longer predicts” which barristers receive the most complaints.

After professional negligence, family law barristers were the most complained about. They were followed by barristers working in the fields of employment, commercial litigation and personal injury.

Surprisingly perhaps, the employment status of barristers emerged as a more important indicator of whether they received complaints than working for direct access clients. Self-employed barristers fared worse than employed, along with those operating on a direct access basis rather than purely instructed through solicitors.

The report found the gender, unlike ethnicity, did “significantly predict” the number of complaints, with male barristers doing worse than female.

The research, based on complaints received and complaint outcomes between 2012 and 2014, found that criminal law barristers were the most likely to have a complaint against them closed without investigation, followed closely by family barristers.

Whether the complaint came from a litigant in person was the third most decisive factor in determining closure, followed by whether it was about a QC.

The report found that ethnicity “no longer significantly predicts” whether complaints are closed.

The most common reasons for complaints being referred for disciplinary action was because of a criminal conviction, followed by failure to comply with the sentence of a tribunal. Others were disciplinary findings by another body and breach of the direct access rules.

QCs were the least likely to be referred for disciplinary action, unregistered barristers the most.

The research painted a different picture of complaints raised internally by the BSB. BME barristers were more likely to feature in this type of complaint than their white colleagues.

Immigration was the area of work found to be generating the most complaints, followed by crime and only then professional negligence.

Sara Jagger, director of professional conduct at the BSB, commented: “It is pleasing that the report indicates there is no significant difference in complaints-handling between BME and white barristers, however it is an area we will continue to monitor.

“We do, however, need to look more carefully at the new findings in relation to the potential issue of gender bias and ensure that we take action to address this. Nevertheless, the report shows the public and the profession that they can have confidence in the fairness of our complaints-handling process.”