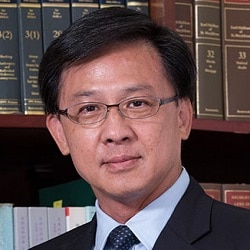 A pro-Beijing Hong Kong politician and former president of the Hong Kong Law Society is set to face the Solicitors Disciplinary Tribunal over allegations that he said pro-independence supporters should be killed.

Junius Ho Kwan-yiu reportedly said that this should be done “mercilessly” while speaking from the platform of a rally he organised in 2017.

Mr Ho is senior partner of KC Ho & Fong and a member of Hong Kong’s Legislative Council. Qualified in Hong Kong in 1988, he has been a solicitor of England and Wales since 1997, having received a law degree in 1984 at the Chelmer Institute of Higher Education, now known as Anglia Ruskin University. He is also qualified in Singapore.

Mr Ho was president of the Hong Kong Law Society in 2011/12. Last year, he was awarded an honorary doctorate in law by the China University of Political Science and Law in recognition of his “outstanding contribution and achievements in the legal sector”.

According to the prosecution notice published this week by the Solicitors Regulation Authority, Mr Ho “made remarks, directed to all attendees, which supported and reinforced comments made by another person which he knew on a reasonable interpretation, carried a meaning to the effect that political opponents to the issue under discussion should be killed; and/or were capable of being perceived as inciting violence against opponents; and/or were capable of causing offence”.

He is facing similar allegations in relation to Facebook posts made at the same time.

According to the South China Morning Post newspaper, during the rally, a guest on the stage said separatists deserved to be “killed”, to which the solicitor added “mercilessly”.

Both then insisted that anyone engaged in wrongdoing “should not be let off under any circumstances”.

It said that, in a subsequent TV interview, Mr Ho said that in hindsight he viewed the “killed mercilessly” comment as an unfortunate choice of words.

The newspaper described him as “outspoken” and “combative”, and said he was “no stranger to controversy”.

Last year, it recounted, he found himself in hot water after he was seen in an online video shaking hands with men in white T-shirts who were later linked to an attack on anti-government protesters and commuters a train station.

It said: “Ho at the time denied any ties with criminal elements and argued he was only passing by the area at the time, though he also publicly defended the mob’s actions.

“Following the incident, Ho’s offices in three districts were vandalised, and his parents’ graves were desecrated.”