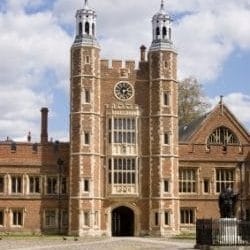 Eton College: Home to corporate lawyers of the future

The proportion of solicitors who attended state schools is creeping upwards, but those who went to fee-paying schools dominate corporate work, according to the Solicitors Regulation Authority (SRA).

It also found that more than eight out of 10 solicitors are under the age of 54.

The figures came from its biennial collection of diversity information, completed last year. With a 96% response rate, this represented 186,000 people working at 9,500 law firms across England and Wales.

But the proportion who went to state schools is rising. In 2014, for every lawyer from a fee-paying school, there were 2.6 lawyers who attended a state school, a figure that reached 2.75 last year.

The SRA also found a difference between partners and solicitors: 23% of partners (down by 1% since 2017), attended a fee-paying school, compared to 19% of solicitors.

“It’s also notable that the larger firms (50+ partners) have the highest proportion of lawyers that attended private school (32%). The firms which mainly do corporate law have the lowest proportion of state-educated lawyers at 46% (made up of 18% attending selective schools and 28% non-selective).

“Nearly four-fifths (79%) of lawyers in firms doing mainly criminal work are state educated (made up of 26% from selective and 54% from non-selective schools).”

Some 51% of lawyers have parents with degree-level qualifications, compared to 19% in the general population, while 15% had a parent who worked in one of the ‘traditional’ professions, like law or accountancy. This is the first time the SRA has asked these two questions.

Among in-house solicitors the proportion of younger practitioners was even greater than in law firms. Two-thirds were aged under 44 while just 8% were aged between 55 and 65.

The figures showed the proportion of women increasing by 1% since 2017 to 49% of all solicitors although just 34% of partners were female, a figure that fell to 29% for firms of 50 partners or more. Some 60% of in-house solicitors were female.

Another positive diversity indicator was that 15% of all lawyers were Asian, up from 9% in 2014, compared to 7% in the wider British workforce.  Yet among firms with 50 partners or more, the number of Asian solicitors was just 5%.

Black people made up 3% of solicitors, roughly in line with their representation in the general population.

By contrast, only 15% of lawyers of firms doing mainly corporate work were from a BAME background.

The proportion of lawyers in law firms who identified as lesbian, gay or bisexual has remained constant at 3% compared to 2% in the general population.

The SRA found that 1% of lawyers and 2% of other staff confirmed their gender identity was different to that assigned to them at birth.

The analysis also supports recent SRA research that disabled people in law firms have understated their disability where that is possible. Only 3% of lawyers declared a disability compared to 13% in the general population.

Paul Philip, the SRA’s chief executive, said: “A diverse and inclusive legal profession which reflects the wider community is not only good for the public but for legal businesses themselves.

“That is why it is encouraging to see progress continuing across many areas, although there is clearly much more work to be done.”

A comparison tool is available on the SRA’s website which allows firms to benchmark how they compare to similar firms in the profession.