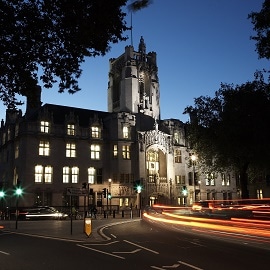 Supreme Court judges should question the make-up of all-male teams of barristers appearing before the highest court in the land as their prevalence is damaging diversity in the profession, researchers have argued.

The work by law academics Steven Vaughan and Chris Hanretty has highlighted the prevalence of homophily at the Supreme Court – the tendency of people to associate and bond with their own gender.

After examining the 1,292 barristers in 470 cases between October 2009 and July 2015, they found that all-male and all-female teams – primarily the former – were much more likely than would be predicted if team formation were gender neutral.

This gender homophily remained when they allowed for the possibility that lawyers paired up randomly within their chambers, or within their area of law.

Mr Vaughan said this showed that the formation of teams of barristers in the Supreme Court was “governed by practices and preferences which make same-sex legal teams more likely than they would be if team formation simply involved a gender-blind draw from a pool of lawyers.

“Barristers appearing before the Supreme Court prefer, for whatever reason, to work with other barristers of the same sex.”

The researchers concluded that this tendency was negative for progress toward gender equality at the Bar. Progress, they argued, “relies, essentially, on exceptional women breaking through”.

Further, it would have impacts on judicial diversity, which senior judges have said was a fundamental constitutional principle.

They advised: “Perhaps the next time a justice of the UK Supreme Court notices an eight-handed, all-male, four-person team appearing before them, they might ask why this is the case and why there were no equally meritorious female barristers to join them.

“It would be, in our opinion, a question well worth asking.”

Of the total number of lawyers studied, 23.6% were female. The academics’ figures showed there were 454 teams where both the lead and the first-listed junior were men and 44 teams where they were women.

If selected randomly, they would have expected the all-female teams to have numbered 27.

A separate calculation showed that when a senior counsel was male, the odds of him having a male junior counsel were 2.5 times higher than would be expected if barristers paired up randomly.

However, the researchers were uncertain whether a pattern of homophily was the result of conscious or unconscious decisions, or exactly how decisions about which barrister was chosen were made.

“More senior women might choose to work with more junior female members of the Bar for greater political and/or strategic reasons than their senior male counterparts (who may subconsciously gravitate towards junior male barristers to work with).

They observed that female barristers faced a ‘catch-22’ situation. “Women do better as juniors when other women are in senior positions (because the seniors can grant the juniors access to more complex cases and litigation in the highest courts); but women only reach senior positions after first being juniors.

“If half of senior barristers were women, then gender homophily would not be so objectionable.”