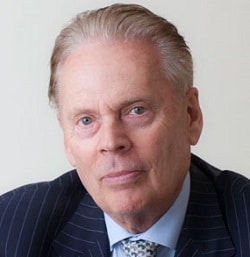 A leading family law solicitor’s meeting with a potential client was for the purpose of conflicting him out of acting for the other side, the High Court has said as it rejected an application to stop him from doing just that.

Mr Justice Williams found that though the meeting with Raymond Tooth – the senior partner of Sears Tooth, famously nicknamed ‘Jaws’ – took place, the representative of the husband involved did not impart confidential and privileged information.

The judge said the meeting, and two others on the same day with Mishcon de Reya and Stewarts Law, “were at least in part motivated not by a genuine consultation but a conflicting exercise”.

He reached this conclusion after it emerged during the hearing that the husband had signed a retainer with Hughes Fowler Carruthers (HFC) a week earlier.

It followed meeting with HFC, Farrer & Co and Charles Russell the week before that.

More than a year after the meetings in November 2015, with litigation over the divorce petition issued by the unnamed wife in prospect, the husband discovered that Sears Tooth was acting for her and objected on the basis that Mr Tooth was privy to confidential and privileged information.

Mr Tooth has long been established as one of the country’s leading matrimonial lawyers, notably acting for the divorcing wives of famous husbands.

The judge had first to determine whether the meeting took place and found on the evidence that “a meeting of sorts” did occur.

However, he was not convinced that confidential or privileged material was shared, finding the husband’s representative, called OE in the ruling, was “in many ways unreliable” – including his failure to mention that the HFC retainer was signed seven days before.

“OE was rather blasé about the need for accuracy in matters evidential,” the judge found.

This included his claim that Mr Tooth sought to charge £700 an hour, a figure Williams J said “comes from nowhere” and was contradicted by evidence from his firm.

Dismissing the application to debar Mr Tooth and his firm, the judge said: “The overall picture that emerges is this was all part of long-term planning by the husband for possible future litigation in England…

Williams J added that it was unlikely the husband would want detailed disclosure of highly confidential information to a significant number of firms. “In particular I doubt it would be authorised after he had retained his first choice firm.”

The judge said OE may have gone through the later meetings to double check his selection of HFC, but continued: “I consider it more likely than not though that by this stage there was also an element of ejecting those solicitors out of the pool of lawyers who the wife might consult.”

He was satisfied that by the time of the meeting, “OE was not seriously considering instructing Sears Tooth and this undoubtedly influenced the nature of the meeting and the information given”.

Williams J added that Mr Tooth was the better witness: “He remains adamant he cannot recall anything about the meeting, which would be consistent with a short but uninformative meeting.

“I find it hard to ascertain why Mr Tooth would say he could not recall it if he could and why he would not have declined to act.

“As a solicitor with 50 years’ practice and with the reputation he has, what is one client more or less, why risk your reputation, indeed potentially more, if he was found to have misled the court over the matter?”

Williams J concluded: “On the balance of probabilities, I do not find that any confidential material was imparted to Raymond Tooth or that any privileged information or advice arises.

“On balance I do not accept that the meeting was anything like that described by OE. I conclude that it was a very brief meeting which perhaps OE was attending to complete the job of going around the firms he had been instructed to with the parallel intention to conflict them.

“Whilst I cannot determine precisely, or even fairly closely, what was said and how the meeting developed, I conclude at most it may have been more in the nature of a brief and theoretical discussion, rather than the detailed, fact-heavy, assets-discussed, advice-heavy meeting that OE seeks to portray.”