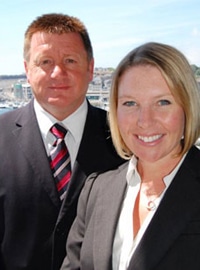 Boyle and Leonard: co-owners at last

A firm in Plymouth has become the first criminal law practice to become an alternative business structure (ABS) as the pace of new licences from the Solicitors Regulation Authority continues to step up.

She is joined in the company by solicitor William Willden and police station representative Tony Boyle. Ms Leonard told Legal Futures that the sole purpose of becoming an ABS was to allow Mr Boyle to become an owner-manager. “He’s a better lawyer than some solicitors I know. It’s only right and proper that someone like Tony should be an owner-manager and it’s nice that he gets the recognition he deserves.”

The pair left their previous firm and set up Baker Solicitors two years ago, and were more recently joined by Mr Willden. They provide a wide range of criminal defence services, and also specialise in child support legislation, liquor licensing, health and safety law, and cases involving the Security Industry Authority and the Independent Safeguarding Authority.

Ms Leonard said obtaining the licence had been a “long and complicated process”, and was relieved it had been granted.

Boyle Leonard Willden is the 16th ABS licensed by the Solicitors Regulation Authority, and seventh in little over a fortnight.