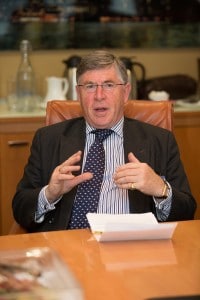 A groundbreaking alternative business structure that last year embraced employee ownership has seen the valuation of its shares rise 15% over the past 12 months.

Staff at Triton Global each received a free initial tranche of 145 shares in the company, worth about £500, and nearly two-thirds have since invested further to the collective tune of £58,000.

Triton is a multi-disciplinary insurance business combining legal advice, claims administration and loss adjusting. It has 140 staff across five offices in the UK, and a further 35 in seven offices overseas. It is a member of the Employee Ownership Association (EOA).

Chairman David Simon told Legal Futures that the first annual independent valuation of the shares had recorded the 15% increase. The plan is to create a market in the shares so that senior members of the firm can turn over their shares on a regular basis, which would both be tax efficient for the vendor and broaden share ownership across the firm, he explained.

The benefits of employee ownership, as articulated by the EOA, are increased productivity, staff retention and the ability to recruit, and Mr Simon said Triton had seen all of these already. Aside from one part-time secretary and a partner who chose to return to New Zealand, the firm has lost no staff in the year, while virtually all chargeable targets had been met.

He added that the firm is recruiting “on all fronts”, with a particular emphasis on apprentices and junior staff to allow Triton “to grow our own”.

So far this year the firm has launched a liability practice with the hire of Richard Salvini from Plexus Law, and opened an office in Toronto.

Neil Trayhurn, global head of legal at Triton, said being an ABS differentiated the firm in the market, while “we are increasingly finding a crossover between our legal, claims management and loss adjusting sides”. He said being able to field loss adjusters first worked out much cheaper for clients than initially instructing solicitors who would then advise the client that they needed to instruct an expert.

In a first for the firm, its UK adjusting team is working with the Chicago office to provide engineering and costs monitoring support for a remedial scheme at a marina in Ohio to complete the settlement of a dispute in which the Chicago office acted for the design consultant and its insurers.

Mr Simon said it was “much easier to get everyone to work together if they are all part of a shareholding democracy”.