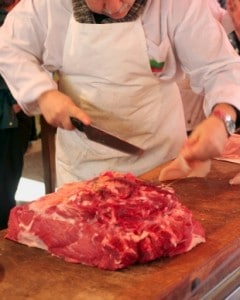 Local butcher: a route to a successful future or prediction of what will happen without change?

No claimant personal injury (PI) law firm will exist in five years’ time if it does not have 20-30 fee-earners, a leading PI practitioner predicted last week.

Richard Langton, managing partner in the Birmingham office of Russell Jones & Walker, told the Association of Personal Injury Lawyers (APIL) annual conference that this would enable firms to open from at least eight in the morning to eight in the evening, and perhaps on Saturdays too.

Addressing a session on what lies ahead for PI practices, Mr Langton, a former APIL president, said such changes were the inevitable impact of the Legal Services Act and what he termed “Lidl Law”, rather than Tesco Law – a no-frills service with a low cost base and high turnover, heavily invested in, and “open all hours”.

The continued existence of reserved legal activities would mean PI lawyers still had jobs, he said, but lawyers would be employed as “technicians or supervisors” with “much lower” earnings than now. Niche firms may survive, he added, but in time their model might be challenged by non-traditional entities too. “Clients aren’t that impressed by the certificate we have on the wall,” he said. “What they want is the right result.”

During the same session, Frances McCarthy, another former APIL president and head of PI at Pattinson & Brewer, urged solicitors to understand the importance of mobile phones and the Internet in interacting with the younger generation of clients. This means taking steps such as ensuring firms’ websites are modern and up-to-date – because consumers will check them out before approaching a lawyer – rapid responses to e-mail, and more use of text messages.

“We have to change our culture,” she said, “but the rewards if we do will be immense.” This is because younger clients “aren’t going to tell a few people in the pub if you do a good job for them, they’ll tell everyone” through Facebook and other social media.

In a later session on ‘future proofing’ practices, new APIL vice-president David Bott argued that small firms can survive if they carve out a strong local niche. “Small doesn’t have to mean poorly run or old-fashioned,” he said. “It just means small.” As well as providing an excellent service as standard, he said small firms need to find a unique selling point.

He drew an analogy with a butcher and a cheese shop where he practises in Didsbury, Manchester, which thrive despite competition from nearby supermarkets because they are rooted in the community, offer fantastic service and excellent products, innovate by constantly coming up with new products, and win awards.

Mr Bott advised solicitors to get involved in their communities and “be a force for good”. This will bring in local work without the need to pay referral fees. “Profitability should be good but it is limited to the size of the local work,” he added.

Mid-sized firms (which he defined as less than £15 million turnover) have the flexibility of a small practice with the funding of a larger practice to invest in IT and infrastructure – and pay referral fees. “You can still act local but with the resources to innovate,” he said, describing it as “the best of both worlds”.

Mr Bott’s firm, Bott & Co, was the first claimant practice to launch an iPhone application to report an accident. “It doesn’t generate a huge amount of work, and we didn’t expect it to,” he said. “But it did generate a huge amount of publicity.” Solicitors should be “building something someone else can buy”, he advised. This need not be venture capitalists, Mr Bott said, but the next generation of partners.