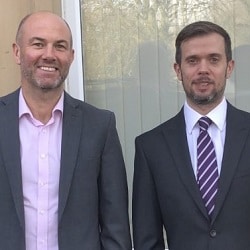 A personal injury law firm in Preston has been saved following its sale out of a pre-pack administration as the weeks before Christmas saw more mergers around the country.

Established in 2001, PHC Law was founded by Philip Cuerden, who died unexpectedly in March 2019.

Chris Wood and Craig Porter, both solicitors at PHC Law since 2004, became caretaker directors and have now purchased the business and renamed it Porter Wood Solicitors.

Joint administrator Jeremy Oddie, partner and head of the corporate recovery and insolvency team at Mitchell Charlesworth, said: “Following extensive marketing, we were pleased to conclude the successful sale of the business to the caretaker directors.

“We would like to congratulate them on the purchase which secures a future for the firm in Lancashire and saves jobs in the region.”

Some seven jobs have been secured by the sale.

Mr Wood said: “We are delighted to have bought the business, safeguarding the jobs of our loyal and dedicated employees and ensuring continuity for our clients.

“Having worked for PHC Law for over 15 years, we look forward to carrying on the ethos installed in the firm by Mr Cuerden, providing a dedicated, caring and professional service to our clients.”

Meanwhile, in merger news, Lincolnshire firm Chattertons – which has 10 offices in the county – has bolstered its staff numbers by 25% after merging with Andrew & Co Solicitors, which has offices in Lincoln and Newark.

Chattertons, which also has a wealth management business, now employs more than 250 people.

Chief executive Edward Conway said: “The merger has enabled us to strengthen our range of services in both locations and allows us to continue to deliver on our commitment to provide excellent client service and to build enduring client relationships.”

In the North-West, commercial firms Primas Law and Freeman Fisher have merged to creating a 35-strong business, Primas Freeman Fisher, trading as Primas. It has offices in Cheshire, Manchester and London.

Primas Law co-owner Adam Kerr said: “Both firms are growing and successful in their own right. But we’re also both highly ambitious and driven to do more for our clients and feel that this is the right time to strategically expand.”

Freeman Fisher co-founder Gary Black said: “This wasn’t a necessity for either firm, but it felt like a unique opportunity to create something ambitious and special together. We feel that the move certainly positions us for a brighter collective future as an enlarged business.”

It said the aim was to become the number one ‘go-to’ provider in the UK for those needing property or private client advice involving France. Both existing brands will continue to operate.

Matthew Cameron, who Ashtons Legal’s French team, said: “Amid all the debate, confusion and concerns in the UK this year about our future role in Europe, one thing has become very clear: the majority of people who love France and the French lifestyle are not going to change their plans in light of the political situation.

“The few who are choosing to sell their existing properties are, of course, also in need of our support.

“The main area in which we are seeing an increase in activity at present is those who already own homes in France and wish to make French wills to sit alongside their English ones. We also deal with many succession issues on behalf of individuals who are inheriting property from parents who retired to France some years ago.”

Barbara Heslop of Heslop & Pratt added: “Whilst our profile and client base is nationwide, our presence in the north of the UK is stronger than that of Ashtons. The full-service Ashtons’ infrastructure will give us the strength and depth that we could not realistically achieve alone.”