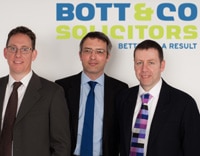 A leading personal injury practice has become the latest law firm to obtain an alternative business structure (ABS) licence as part of its preparations for the impact of the Jackson reforms.

It brings the total number of ABS licences granted by the Solicitors Regulation Authority (SRA) so far to 30.

David Bott & Co in Wilmslow took the step in order to promote two key non-lawyer members to positions of equity partner. Practice manager Paul Hinchcliffe and finance manager Gary Froggat co-founded the firm in 2001 with David Bott – who until April was president of the Association of Personal Injury Lawyers.

Mr Bott said: “Being granted ABS status as one of the first personal injury firms in the country increases our readiness to take on the changes that will inevitably arise from the Jackson/Young reviews.”

Mr Hinchcliffe said: “We will use this ABS licence as a springboard to developing the business and show the world how modern and forward thinking we are… While we will continue to operate as we are, as an ABS we can now look at how best to structure and develop the business in a rapidly-changing legal environment.”

Mr Bott told Legal Futures that the firm applied for a licence as soon as ABSs went live in January, primarily in order to enable his colleagues to be “treated as genuine equals”. He welcomed the fact that ABSs now made it possible to elevate members of the firm according to their abilities, “where previously merit was assessed only subject to the question of whether you are a solicitor”.

He said the firm had no plans to seek external investment but if in future talks with third parties over possible expansion took place, having an ABS licence was “an indication that you have a certain way of thinking and that you are approaching your business in a modern way – and not caught up with the idea that all of the world’s knowledge is in a lawyer’s head”.

He continued: “As a company we have always tried to be at the forefront of developments in terms of service, productivity, and client care… I think that allowing non-lawyers to take ownership is a force for the good and I think it is time for the industry to embrace the change.”

Mr Bott said that becoming authorised as an ABS was “understandably rigorous” and “more complicated that we thought”. It involved having to “jump through quite a few hoops and answering quite a few searing questions”.

But he commented: “I don’t have any criticism of the process… The people that we’ve spoken to at the SRA have been really supportive and have been collegiate and collaborative in many ways.”

Mr Hinchcliffe said: “Our internal governance, care of service and IT investment has been second to none and we’ve always looked to progress in the most modern way with Lexcel accreditation, Investors in People, winning CILEx Employer of the Year – and now ABS status.”