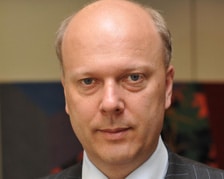 The House of Lords constitution committee has launched an inquiry into the office of Lord Chancellor, in the wake of its warning last week that plans by the current occupant, Chris Grayling, to limit judicial review risk “undermining the rule of law”.

Announcing the inquiry, the committee said that although the Lord Chancellor was no longer head of the judiciary or presiding officer of the House of Lords, he retained a role in appointing judges and had statutory duties to uphold judicial independence and the rule of law.

The inquiry will investigate the current functions of Lord Chancellor and how they differ from Mr Grayling’s other role as justice secretary.

It will examine whether the combination is “appropriate”, or whether the Lord Chancellor should have a “more independent voice”.

Peers will also consider what the Lord Chancellor does to “uphold the rule of law and judicial independence”.

In their report on judicial review, peers expressed concern in the report about the “Henry VIII powers” the Lord Chancellor would receive under clause 68.8 of the Criminal Justice and Courts Bill.

Under the clause, Mr Grayling would have the power to change, by parliamentary order, the list of matters which courts must have regard to when determining if a judicial review is a ‘public interest proceeding’. Peers were asked to consider whether this was “constitutionally appropriate”.

The inquiry will ask whether, unlike Mr Grayling, the Lord Chancellor should be a lawyer and whether he or she should be a member of the House of Lords.

Lord Lang of Monkton, the committee chairman, said: “The office of Lord Chancellor is one of the oldest in the British constitution, but relatively recent changes have changed the role considerably.

“It is now approaching 10 years since the passing of the Constitutional Reform Act, which ended the Lord Chancellor’s role as head of the judiciary and presiding officer of the House of Lords. This followed a hasty reshuffle in which it had been suggested that the office of Lord Chancellor would be abolished.

“We will look at the role as it is now. Does the Lord Chancellor still have any real powers? Is the position appropriately independent of government?”

The constitution committee will begin oral hearings this month, before resuming in October. Interested parties should submit written evidence by 29 August 2014.

A spokesperson for the Ministry of Justice said: “The Lord Chancellor takes all of his responsibilities extremely seriously. The Constitutional Reform Act clearly sets out this role and we believe the current arrangements are working well. We look forward to providing evidence to the committee in due course.”