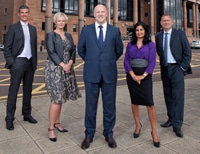 Winn Solicitors – the firm which was last week bought by two private equity businesses – now has the firepower to expand beyond its core road traffic practice, founder Jeff Winn has told Legal Futures.

JZI International and Souter Investments took a 60% share in the personal injury (PI) firm, following what the solicitor described as a “nightmare” process of applying for an alternative business structure (ABS) licence.

Winns has grown in a decade to one of the country’s most successful PI firms. It sources a lot of work from brokers and Mr Winn said the cash intensive nature of PI practice meant “there have been opportunities with bigger brokers in the past where we had to walk away because the funding requirement was too great”.

This will no longer be a problem, while Winns can now look to build relationships with some of the large prestige dealerships, where the need to repair expensive cars again means the firm needs a lot of cash.

Mr Winn said they are considering whether to branch out into other areas of PI, such as employer’s liability and industrial disease, as well as other non-PI services that are process-driven in line with the firm’s highly automated approach to the law.

Though the “starting position” is that Winns will grow organically, they have the funding to acquire if necessary.

Talks began with JZI 18 months ago. JZI later brought in Souter Investments because the cost of the investment was rising as the firm continued to grow and also to bring in “a bit more firepower”. Both were already looking at the law and have a track record of investing in regulated businesses, Mr Winn said.

The agreement is that the investors will review after five years whether they want to exit or continue.

One of the uncertainties in the fast-track market is the possible increase in the small claims limit for PI cases to £5,000. Mr Winn said that if this happened the firm could run them under damages-based agreements, but would have to take a percentage of damages (at the moment, unlike many PI firms, Winns is not taking a success fee from claimants’ damages).

With its low-cost system and the likelihood that other law firms would drop out of the market, processing such cases at volume would be key to making it work.

The ABS application took nine months, and Mr Winn explained that the problems were caused in the main by the Legal Services Act, which he said was not designed for private equity investment, rather than the Solicitors Regulation Authority (SRA) – a point the regulator has itself often cited as a cause for delays in the approval regime.

JZI is a fund made up of investments from lots of other funds and this led to the SRA identifying hundreds of people whom it needed to look into as potential owners of the law firm.

Mr Winn reported that the list was narrowed down “a bit”, but in one case a woman had to travel home to Mexico for the equivalent of a Criminal Records Bureau check, and had required an armoured vehicle and bodyguards to do because she was afraid of being kidnapped.

Mr Winn said there are other investors out there keen to support good business models, and speculated that a “major player” or a group of investors might look together to put together efficient firms in different practice areas to create a “mega firm”.