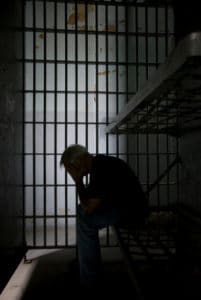 Cell: Lewis was locked up with informer for hours on end

The Public Defender Service (PDS) unfairly dismissed an employee who suffered from post-traumatic stress disorder (PTSD) after her work debriefing a murderer.

The employment tribunal found that it failed to consider whether she could work from home.

Wendy Lewis, who had worked for the PDS since 2001, was as an accredited police station representative. From 2010 to 2013, she was assigned to debrief a police informer who had been involved in terrorist activity.

She said she attended nearly 1,000 interviews with ‘client X’, dealing with 500 individual serious offences including numerous murders, attempted murders and conspiracy to murder.

So sensitive was the work that Ms Lewis had to sign the Official Secrets Act, meaning she could not discuss it with anyone.

Ms Lewis told the tribunal that she had no support from the Ministry of Justice throughout the assignment, despite working in “extremely challenging conditions”.

She said she regularly worked 12 hours or more each day for consecutive two-week periods away from home, and would be locked in a confined complex comprising of the cell where client X was housed and the interview room.

She said that, as a result of the work, she experienced psychiatric symptoms and was subsequently diagnosed with PTSD.

The tribunal heard: “On a day-to-day basis I am isolated and lack trust even in my closest friends and family at times…

“I do not like to go out places with which I’m not familiar or where there are crowds of people. I have suffered panic attacks when I do go out and so avoid this at all costs.

“I always check for an escape route wherever I am and cannot sit with my back towards a door. I like to have doors open except at home where they are all locked. I avoid using the telephone at times, never answer the telephone if I do not recognise the caller and even avoid answering the door to friends…

She spent much of the subsequent four years on sick leave before being dismissed in 2017 on the grounds that there was no foreseeable return to her current or alternative role, and no reasonable adjustments that could be identified to aid a return to work.

The majority of Ms Lewis’s claims were dismissed. These related to whistleblowing, automatic unfair dismissal, victimisation and an unauthorised deduction from wages.

However, Ms Lewis’s complaint of ‘ordinary’ unfair dismissal was upheld, and the tribunal found that it was an act of discrimination arising from disability.

The PDS’s refusal to allow one of her colleagues to act as representative for the period of a month was a failure to make a reasonable adjustment, as was its failure to allow her to work from home instead of dismissing her.

This failure to enquire whether Ms Lewis was well enough to perform work from home was key.

The tribunal said: “In light of the finding that failure to allow home working was a failure to make a reasonable adjustment, we conclude that the respondent cannot show justification for dismissal in the circumstances of the case without having complied with that adjustment…

The tribunal said a remedy hearing would be listed in due course.