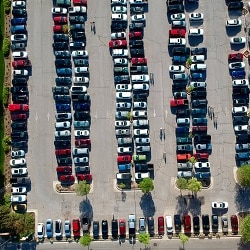 Two partners who saw more than £100m pass through their firm’s client account for a car parking and storage pod investment scheme have been fined for misconduct.

Peter Jan Bujakowski and Craig Nicholas Hollingdrake, who were directors of North-West firm JWK Solicitors – which was bought by Simpson Millar in December 2018 – were fined £20,000 and £7,500 respectively.

A section 43 order was imposed on Elaine Saunders, at the time a graduate member of the Chartered Institute of Legal Executives, that prevents her from working for law firms without the permission of the Solicitors Regulation Authority (SRA).

The Solicitors Disciplinary Tribunal (SDT) heard that ‘Client A’ purchased real estate which could be redeveloped into storage units or individual car parking spaces and then sold on.

The allegations arose out of work carried out by JWK for Client A-related entities between 2011 and 2016, acting in about 15,000 transactions across over 23 sites for Client A, with some of the buyers unrepresented.

The SRA estimated that more than £101m passed through its client account.

Private individuals, or the providers of self-invested personal pensions, bought long leaseholds in the parking spaces or storage pods, and sub-leased them to Client A entities, which could sublet them again to an end user.

Buyers had a window of only one month, five years after purchase, to give notice that they wanted Client A to buy back their investment, and Client A was under no obligation to do so.

Money from the sale of storage pods and parking spaces was sometimes transferred from JWK’s client account to third parties – albeit not to any unknown third parties – or from one group company’s ledger to another, before being paid out.

As the funds should have gone to the entity which instructed the firm, this meant those latter transfers did not involve an underlying legal transaction.

The SRA acknowledged that inter-ledger transfers only involved Client A group companies and were always done with client authorisation.

Approving two separate agreements between the JWK lawyers and the SRA, Mr Bujakowski admitted allowing contractual documents to be sent to buyers, in a situation where marketing materials were inconsistent and capable of misleading buyers in terms of their security, future returns and the value of their asset.

He admitted allowing other documents to be sent to buyers in the form of a ‘buy back’ arrangement, which did not provide meaningful security.

The partner admitted breaching the accounts rules by allowing transfers from JWK’s client account of money received from buyers “other than in respect of instructions relating to an underlying transaction”.

However, the agreements did not indicate that buyers had lost their money, while the risk of money laundering that can come from a firm providing a banking facility did not materialise here.

Mr Bujakowski said, in mitigation not agreed by the SRA, that he instructed leading counsel to consider the contractual documents for Client A, and when alerted by the SRA to the potential breaches, he introduced firm-wide training.

Given his experience – Mr Bujakowski qualified in 1976 – the SRA said he should have know his conduct was in breach of his obligations to protect the public and the reputation of the profession.

Mr Hollingdrake, who qualified in 1989, admitted providing a banking facility to the Client A group, and further breaching the accounts rules by carrying out inter-ledger transfers and making improper payments from client account.

In his mitigation, Mr Hollingdrake said he was not a fee-earner on any of the transactions which gave rise to the allegations and the proceedings had been “financially disastrous” for him, because he “received nothing for his share in the firm which was his retirement fund”.

The SDT noted that he was “not the main protagonist” and the allegations against him were limited in scope and nature – the breaches were “inadvertent and did not cause loss to clients or the purchasers of the store pods/parking spaces”.

But as the COFA, he should have been “more vigilant”.

Ms Saunders worked for Mr Bujakowski and headed a team of staff handling the sales or leases to investors in the Client A schemes.

She admitted failing to consider whether the content of marketing materials seen by her “overstated the returns to potential buyers” and whether the ‘buy back’ arrangements constituted meaningful security.

The SDT said she too should have exercised “more vigilance and thought”, but acknowledged that she was supervised by one of the firm’s owners.

Mr Bujakowski, Mr Hollingdrake and Ms Saunders – all of whom hitherto had clean regulatory records – were each ordered to pay £9,000 in costs. In the case of Mr Lee, no order was made as to costs.