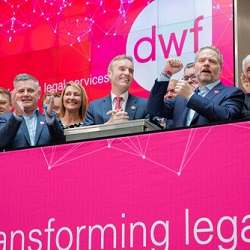 DWF: Celebrations at the stock exchange on the day of admission

Partners and staff at DWF – the only law firm listed on the main London Stock Exchange – have sold nearly £14m of shares, some 4% of its issued share capital.

The placing of 13.3m shares at 102p was significantly oversubscribed, and the new shares have been acquired by both new and existing investors.

At and since the time of DWF listed in March 2019, certain partners, their connected persons and employees have entered into phased lock-up arrangements, including as part of DWF’s acquisitions.

The arrangements release annually on announcement of DWF’s preliminary results for the financial year to 30 April, which were issued last month.

The shares sold this year include certain shares previously purchased by DWF’s employee benefit trust from employee sales to cover tax arising on the vesting of share awards.

DWF’s shares, which were issued at 122p, reached a high of 142p shortly before the pandemic hit and fell to a low of 53p in June 2020. The price has recovered since and were up 7% yesterday to 109.5p, the highest post-pandemic mark.

Two of the DWF partner sellers were Michele Cicchetti and Seema Bains, both partner directors on the PLC board, who sold 185,000 and 263,000 shares respectively.

Separately, Ms Bains sold another 137,000 shares in June at 107p, while last month chief financial officer Chris Stefani saw 222,800 restricted shares vest as part of his IPO share award and then sold 105,000 of them to cover tax liabilities at a price of 105.5p.

Last September, DWF partners sold shares worth £4.25m at the first opportunity to sell some of the stock they received from the float.

It was introduced in 2016 for the benefit of associates, senior associates, legal directors and equivalent positions across the group, including senior management positions in support teams, “in order to enhance their alignment with the long-term success of the group and reward them for their contributions over the vesting period”.

Gateley’s share price closed at 216p yesterday, having reached an all-time high of 223p last month. They fell to 117p in March 2020 in the wake of the first lockdown.