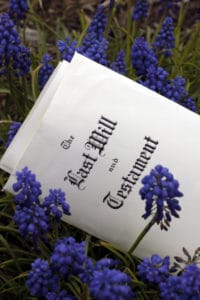 Will: solicitor admitted to conflict of interest

A partner at a leading law firm who did not inform the client whose will he was revising that he was in a personal relationship with one of the beneficiaries – herself an associate at the firm – and gave himself the power to grant her 11 times as much as she was due from the estate after the client died, has accepted his removal from the profession.

Anthony Reese Whitwell, born in 1958 and qualified in 1983, was a partner and one-time head of private client in the Godalming office of Penningtons until January 2013. He subsequently moved as a partner to Clarke Willmott, leaving in September 2015, and now appears to be operating as an independent, non-solicitor trust and estate practitioner.

In a newly published statement of agreed facts, admission and outcome that was approved by the Solicitors Disciplinary Tribunal (SDT) and removed the need for a full hearing, he accepted that he would be struck off for his actions.

The statement said that at all material times, until August 2012, Mr Whitwell was in a “confidential personal relationship” with a woman, ‘Ms F’, who was an associate solicitor at the firm working as part of his team.

He informed Ms F that the relationship was over on 14 August 2012, and told his wife about the affair the following week. Ms F resigned shortly after.

Back in 2010, Ms F had introduced to the firm a Mrs JDB, a lifelong friend of her mother, initially to prepare a lasting power of attorney. In 2011, Mr Whitwell was asked to review Mrs JDB’s 2006 will, which left £50,000 to Ms F among several legacies.

He prepared a will transferring Mrs JDB’s residuary estate to the executors, who were to be partners of the firm, to be held on a discretionary trust. There was a letter of wishes, which again said that £50,000 was to go to Ms F.

At no point did Mr Whitwell tell Mrs JDB or his firm that he was in a relationship with Ms F.

When Mrs JDB died a few months later, Mr Whitwell drew up a deed to appoint himself as the sole executor, and exercised his discretion under the will to grant Ms F a legacy of £550,000. This happened before their relationship ended.

In December 2012, Penningtons’ compliance officer for legal practice referred the matter to the Solicitors Regulation Authority.

Subsequently the firm referred the estate to another firm, Paris Smith, so it could exercise the discretion to distribute the residuary estate again. Ms F agreed to execute a deed of variation to return the funds to allow for this.

Mr Whitwell admitted that he had acted in a conflict of interest and that he should have advised Mrs JDB to take independent advice about her bequest to Ms F.

He further admitted that in granting her £550,000, he had acted without integrity, had allowed his independence to be compromised, acted where there was a conflict of interest, and in doing so had acted dishonestly.

Mr Whitwell also admitted that he had falsely and dishonestly claimed to the regulator that he had not drafted the deed of appointment, and also caused his solicitor to tell the SRA the same lie.

His barrister told the SDT: “[Mr Whitwell] had never previously thought of himself as a dishonest person, and his recollection of the period was poor. He could not fully explain why he had acted in the way he did. He now admitted the allegations of dishonesty to which there appeared objectively to be no credible answer.

“[His] focus now was on preserving his improved mental state and rebuilding his relationship with his wife. He no longer wished to practise as a solicitor and had no desire to face a contested hearing which raked over these issues which had already caused him and his family much pain. He wished to put the chapter of his life to which this these allegations related, and about which he was ashamed, behind him.”

The SDT ruled that the sanction of striking off Mr Whitwell was “clearly appropriate”. He also agreed to pay £56,500 in costs.