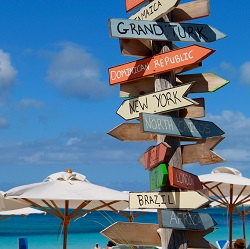 Turcs and Caicos Islands: Solicitor’s partners were based in the Caribbean

A partner in a London law firm whose other two partners were based in the Turks and Caicos Islands has been fined £25,000 for allowing its client account to be used as a banking facility and failing to make adequate identity checks.

Marc Traube admitted that the customer due diligence (CDD) he carried out was “not sufficient enough”, although it did not amount to “complete non-compliance”.

The Solicitors Disciplinary Tribunal (SDT) heard that Mr Traube, admitted in 2005, was a partner at London firm Karam Missick & Traube, and its COLP and COFA at the relevant time.

A forensic investigation report by the Solicitors Regulation Authority (SRA) recorded that, of the two other partners, “one has never done any work for the firm and the other has had involvement in one matter only”.

An agreed outcome between the SRA and the solicitor approved by the SDT said Mr Traube was introduced to Company B’s managing director, Person 2, by his partner Peter Karam, a friend of Person 2.

Person 2 introduced Person 1, who instructed the firm on behalf of Company A, registered in Northern Cyprus.

Person 1 was “expecting to receive an investment of €300,000” from Company B, which was a UK company.

The SRA said the initial purpose of opening the client account was “capital commercial funding for real estate projects”, the initial balance being recorded as €300,000 with a view to up to €200m worth of transactions .

Company C was associated with Person 2’s son; the payment was said to be for SEO and IT work.

Mr Traube admitted allowing the firm’s client account to be used as a banking facility and failing to carry out adequate customer due diligence checks on Person 1 and Company A.

Mr Traube told the SRA that he considered the transaction risk low and had no concerns or suspicions about any of the parties. But “in hindsight” he said he should have carried out more checks of Company A’s documents; for example, there was no evidence that the source of funds was scrutinised.

He checked Person 1’s national identification card and passport, which, although not certified, meant Person 1 could be identified.

There was no dishonesty but the SRA said the misconduct was aggravated by the absence of self-reporting and the fact he should have known he was in “material breach” of his obligations.

Mr Traube said he had appointed a new money laundering reporting officer, and the two of them were going on a refresher course.

In deciding that a £25,000 fine was an appropriate penalty, the SDT said: “Mr Traube was an experienced solicitor with direct control and responsibility for his misconduct. Further, at the time of the misconduct, Mr Traube was the compliance officer for the firm.

“Whilst no client had suffered financial loss, Mr Traube’s conduct had caused harm to the reputation of the profession.”