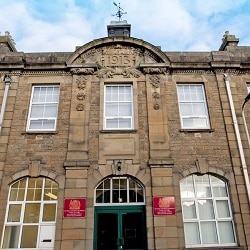 A partner at Eversheds Sutherland was found dead hours after being suspended from work for alleged sexual behaviour towards women colleagues at a Christmas party, an inquest heard last week.

Geraint Thomas, 47, left a disciplinary meeting in the Cardiff office and drove straight to a clifftop beauty spot – Southerndown Beach in Glamorgan – where his body was found the next day.

His wife, Rebecca, told the hearing she had no doubt the meeting was “fundamental” to her husband’s state of mind and actions.

But a coroner brought in a narrative verdict that Mr Thomas may have slipped on the clifftop in bad weather and fallen to his death.

Mr Thomas, a commercial lawyer, had worked in the Cardiff office since 1994, after graduating from Oxford University.

She said: “We decided this was something we needed to consider very seriously. We arranged to meet at 8am on Monday morning to discuss matters further and after going through the main points I made the decision to suspend Geraint.”

Ms Kilborn said Mr Thomas was “calm, polite and professional” and made no comment about the allegations put to him.

She added that the firm offered to carry out the investigation within three days to allow him to carry on with a “trip of a lifetime” to Australia with his family.

The investigation was halted when the firm “learned of the tragic circumstances of his death.”

In a written statement, he told the hearing: “A number of individuals had raised complains about Geraint’s behaviour at two events.

“At the meeting he was told he would be given a full opportunity to answer the allegations and support was offered.”

The inquest in Pontypridd heard that Mr Thomas said “thank you” as he left the meeting at 12.55pm on 17 December last year.

He was later seen looking “reflective” by a walker and there was evidence that Mr Thomas lit a fire inside a walled garden on the clifftop.

His wife of 18 years, Rebecca, said Mr Thomas was happy, stress free and looking forward to the holiday to Australia.

“I have no doubt that whatever was said at that meeting was fundamental to Geraint’s change of state of mind and subsequent actions that day.”

Detective Chief Inspector Mark Lewis told the hearing that Mr Thomas’s mobile phone had internet searches on Brexit and cricket but nothing to indicate he intended suicide.

He said: “There were traumatic messages from Mr Thomas’s wife and children pleading for him to come home which remained unanswered.”

A post mortem examination revealed that he died of multiple injuries “in keeping with a fall from a height”.

The inquest heard Thomas had never been seen by his GP for any mental health issues.

He said: “It is a possibility that in the dark, and in heavy rain, he simply travelled too close and either stepped or fell and was blown off the edge.

“Suicide must be proved and there was no evidence that he formed any intention, there were no notes either at home or in his car.

“There were no text messages and no evidence of suicidal ideation.”

Recording a narrative verdict, the coroner concluded: “The deceased died as a consequence of catastrophic injury descending from the cliffs.

“The circumstances cannot be sufficiently determined on the available evidence.”

After his death, Eversheds said in a statement: “Geraint was a truly exceptional lawyer, he will be remembered for his dedication to his clients and to the firm in equal measure.”

His widow declined comment on the result of the hearing as she left the court.