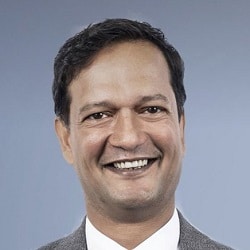 There is a “lead ceiling” hampering the advancement of ethnic minority lawyers to the senior ranks of the profession and quotas are needed to bring about change, a leading asylum barrister has told parliamentarians.

Giving evidence to the All-Party Parliamentary Group on legal aid last week, Dr S Chelvan, head of immigration and public law at 33 Bedford Row, said there needed to be more action to improve the diversity of the profession, which in the more than 20 years since he qualified had not happened fast enough.

He pointed to a single ethnic minority judge on the Court of Appeal, Lord Justice Singh, as evidence of this.

“I would look at positive discrimination and quotas, which no one talks about,” he said.

“There is a lot of discussion of meritocracy but… it’s no use opening the doors and encouraging under-represented colleagues into the profession if they break the glass ceiling and they hit the lead ceiling.

“We need to ensure it is their full journey and full lived experience.”

He recounted that, as a junior barrister of Asian origin, a court clerk had mistaken him as an interpreter. The discussion about what to do about it had changed since then, however. When this happened now, ethnic minority lawyers pushed back, he said.

Co-founder and Chair of the Black Barristers Network, Natasha Shotunde of Garden Court Chambers, told the event that the economics of being a young self-employed barrister were incredibly difficult.

“Junior barristers often have to take on a [high] volume of work in order to be able to sustain their practices and that can have massive knock-on negative effects on our well-being, leading to burnout. It can also [mean] we don’t have time to prepare our cases.”

She added that working with vulnerable clients could put young barristers in physical danger. She gave the pre-pandemic example of a mentally ill client shouting in her face while court security staff did nothing.

Another witness, junior barrister Michael Etienne, also a tenant at Garden Court Chambers, said that the “myth” of legal aid lawyers as ‘fat cats’ had complicated bringing to the notice of politicians the consequences of low rates of pay and delays by the Legal Aid Agency.

Every barrister was entitled to have pay stability in their working lives and the importance of the rule of law to society justified it, he said.

Shadow lord chancellor David Lammy MP expressed his concerns about young lawyers in publicly funded work being saddled with tens of thousands of pounds in debts and the loss of high street law firms, alongside the broader issue of legal aid cuts and advice deserts.