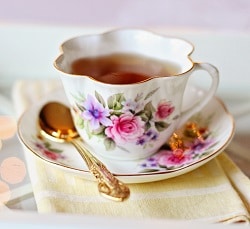 Tea: Senior partner’s cuppa “seems to feature prominently in the life of the office”

A paralegal who was subjected to a “long accumulation of abuse” by the senior partner of a London law firm was the victim of harassment on the grounds of age and sex, an employment tribunal has found.

However, most of the incidents cited did not amount to harassment because the paralegal received the same kind of general abuse that all staff at Wilson Barca did, while the age-related comments came from another member of staff.

Employment judge Pearl said the applicant, a Ms M Shirin, was described as “fucking stupid” only two days after her arrival at the firm, after she was told that her duties included making tea for senior partner Richard Barca.

Ms Shirin, who had previously qualified as a barrister, recorded the incident in a journal.

Judge Pearl said: “He did not approve of how she made the tea and he shouted ‘how fucking difficult is it to make a fucking cup of tea? You fucking stupid why can’t you get it into your fucking head’.

“We find that with the amendment of ‘you are fucking stupid’, these words were spoken, on the balance of probabilities. There is no real denial in Mr Barca’s witness statement and we have no reason to doubt that the journal is broadly correct.

“The words are in character for Mr Barca and his reference to tea-making as an assignment is something that generally corroborates the claimant’s account. Mr Barca’s tea seems to feature prominently in the life of the office.”

Judge Pearl said Ms Shirin, aged 51, “qualified in later life as a barrister” and was “excited” by the paralegal vacancy because she was looking for a training contract and the role offered that possibility. At interview, Mr Barca told her that he had temper issues.

The judge said: “This case revolves around the question of Mr Barca’s temper. It is not only agreed, but also an essential element in the defence, that he has a very short fuse, gets angry when he considers that things have not been done correctly and he shouts and swears.”

Mr Barca accepted that he had shouted at Ms Shirin and he said it was because she repeatedly failed to follow his instructions.

“In his witness statement, Mr Barca accepts that he shouted and swore at the claimant. His reason for doing so is throughout said to be her inability to follow instructions. He denies the number of incidents alleged and their frequency. He says he shouts and swears at all his staff and also clients.”

Judge Pearl said Mr Barca’s behaviour was “unconscionably boorish” but it was “a fair assessment of the evidence” that he treated everyone in the firm rudely if they made a mistake.

“It is the claimant’s misfortune that she found herself in such an offensive environment, but the essential question for all the harassment claims is whether the unwanted conduct related to a relevant protected characteristic.

“For the most part, it did not. To give an example, calling the claimant ‘fucking stupid’ does not relate to her gender and the evidence is that anyone in the office whose conduct fell short of Mr Barca’s standard received the same abusive description.

“It is indefensible, grossly offensive, relevant to a claim for constructive unfair dismissal, but it is not harassment in law.”

Ms Shirin was precluded from claiming unfair dismissal because she had worked at Wilson Barca for less than a year, between November 2015 and June 2016, before she resigned.

However, Judge Pearl found that on two occasions she had been subjected to harassment on the grounds of gender under the Equality Act 2010, when Mr Barca, who was “unrestrained in abusing employees”, called her a “stupid cow” and a “stupid cunt”.

He went on: “There is no question that these remarks had the effect of creating a degrading and hostile environment for her and no defence can be raised on the basis of the reasonableness provision of the section.”

The judge also found that Ms Shirin had been subjected to harassment on the grounds of age, this time as a result of four separate comments made by another employee.

Claims of harassment on the grounds of race were not upheld.

Judge Pearl said that after a “long accumulation of abuse of the claimant”, Ms Shirin “finally snapped” and her health went into decline after June 2016. This was a classic “last straw”.

“That there were acts of tortious harassment along the way does not mean that her resignation and constructive dismissal were because of gender (or age).

“These incidents and the protected characteristics were incidental to the real reason for which she resigned, which was the constant barrage of abuse, principally from Mr Barca, and most of which did not infringe the Equality Act.

“We would, accordingly, hold that the constructive dismissal was not an act of direct discrimination.”

The tribunal gave the parties 14 days to submit their proposals for directions for a remedy hearing.

Mr Barca told Legal Futures that, with Ms Shirin seeking a reconsideration of the decision, he could not comment.

In August 2015, he was reprimanded by the Solicitors Disciplinary Tribunal for asking a solicitor in an email to behave “like a normal person instead of a complete plonker”.