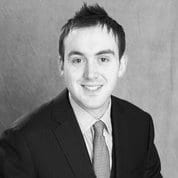 Lawler: “money is an issue” for would-be solicitors

Paralegal Shaun Lawler has said he hopes to be the first solicitor admitted to the profession through the ‘equivalent means’ route rather a traditional training contract.

Mr Lawler, based at Malletts Solicitors in central London, said he hoped to be admitted in June after passing his LPC exams in May.

“I’m hoping for a distinction, but I’m confident I will get a pass,” he said.

Mr Lawler said the experience he had gained a paralegal was “exactly the same” as you would get from being a trainee solicitor.

Mr Lawler said that, as far as he was aware from the SRA, he would be the first to be admitted to the profession in this way.

“The only difference is the signed piece of paper,” he said. “A lot of people are led along by their employers about the possibility of a training contract. I know people who’ve been paralegals for three to four years without getting one.”

Mr Lawler was a law student at Lincoln University before working for two years at a Leeds charity called the Consumer Credit Counselling Service, which offers free advice on debt and bankruptcy.

From there he obtained a paralegal job at a general practice in central London, where he worked for two years. Mr Lawler said that ‘equivalent means’ required a paralegal to work in three different departments, contentious and non-contentious.

“I’ve been lucky,” he said. “I’ve got friends employed in only one department, and that is all the work they can do as a paralegal.”

Mr Lawler said the start of the new route to qualification was good for the SRA and the profession, because “nothing had changed in terms of standards in any shape or form”.

He went on: “A training contract is just a form signed by a supervisor in a law firm and the SRA does not check that experience. This isn’t a shortcut – it’s really hard.

“Money is an issue. I can’t think of any other profession where there is so much outlay of money, separate from the risk involved.

“Friends of mine have done the LPC without getting a training contract, and they’ve left the law for banking or to set up their own businesses.”

A spokesman for the SRA said the regulator had received 29 applications for recognition through equivalent means.

“Four people have satisfied the training requirements under the equivalent means provision and so are eligible to seek admission. Five applications have been withdrawn and 20 are pending.

“We carry out an initial check on applications to see if we can provide guidance on overall quality and whether they might need additional detail or evidence. The applicant can make further representations on the detailed assessment of their application before we make a final decision.”