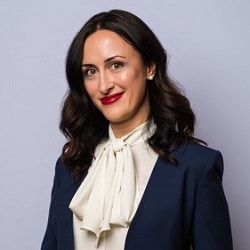 Zenina: Our costs are incredibly competitive

The founder of a niche commercial law firm which advises start-ups has said this summer was the “right time” to launch the business, despite Covid-19.

Zhanna Zenina, chief executive of Linkilaw Solicitors, said the pandemic gave new businesses a chance to rethink their objectives and “get their legals in order”.

She said that, in the first month of Linkilaw’s operation since its ‘soft launch’ in July, the firm advised 15 new start-up clients. The law firm’s website was launched at the beginning of this month.

Ms Zenina, who is also a qualified Russian lawyer and US attorney, said: “I don’t see the pandemic as having a substantial impact on the technology sector at this stage. Businesses still get started and grow.

“It gives businesses a chance to rethink who they are, where they are going and what they need from their legal adviser. It’s an opportunity for them to get their legals in order.”

Ms Zenina said Linkilaw was originally the name for a platform created five years ago to help early stage businesses by her co-director and owner, Alexandra Isenegger.

Ms Zenina said that, in contrast, Linkilaw Solicitors advised firms which were “more developed” – considering a funding round or hiring more staff.

“We get enquiries from companies that have just been set up, but may have been working under a different umbrella. Now they are ready to take things to the next level, perhaps by talking to investors or creating a shareholder’s agreement.”

Ms Zenina said she expected the number of consultants to rise to 10 by the end of the month, and 25 in four to six months. The firm’s legal project managers and business administration are based in London, while Ms Isenegger is based at a second office in Lisbon, where she lives.

“Using consultants means that our engagement with lawyers is very flexible and our costs are incredibly competitive.”

Ms Zenina added that she and Ms Isenegger would launch a new non-legal technology firm in January next year, called Linkilite.

“We will provide packages and tools to allow early stage businesses to produce documents with us in a collaborative manner so their basic needs are met straight away.”