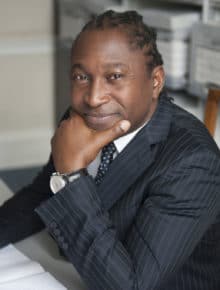 Thomas: nobody believed he was lawyer

At the present rate, it will be 100 years before the percentage of black and minority ethnic (BAME) QCs mirrors the general population, an event on improving race equality at the Bar heard last month.

Dr Leslie Thomas QC of Garden Court Chambers also told the event, held by the Bar Standards Board (BSB), that his own experience of racial prejudice included occasions when he had turned up at court in a suit and was seen as anyone but the lawyer.

According to a summary of the event produced by the BSB, participants complained of racial discrimination at the Bar including “overt bullying and harassment, offensive, inappropriate and ill-informed comments and questions and prejudicial assumptions about capabilities”.

Ms Ibrahim shared her experience of being asked about her opinion on the burka at the end of an unrelated county court application.

She told the event: “You may think that you are part of the Bar, you’re part of a community, but you get various experiences along the way when you are reminded that people are thinking of you differently and that can be incredibly disconcerting.”

Dr Thomas argued the Bar should be considering BAME children early in their education – as early as entrance to secondary school – and that “university is too late in the academic process” to be targeting students for entry to the profession.

He highlighted a long-term mentoring scheme run by Garden Court, which offered 16-year-old BAME students and others paid five-year internships and university scholarships. The scheme is funded by a levy on the chamber’s barristers.

He added: “I challenge any black person here to say, practising as a lawyer [that] you haven’t experienced discrimination in some form or other. We all do.”

Possible solutions to improving race equality at the Bar, suggested by participants, included greater transparency around the recruitment of pupils and barristers; zealous enforcement of diversity obligations on chambers by the BSB; development of a quality mark to recognise good practice; compulsory diversity awareness training; and unconscious bias training.

Speaking after the event, the BSB’s head of equality and access to justice, Amit Popat, said the solutions raised would be carefully considered.

He added: “Through the development of an action plan, we will continue to work with the profession and others to help improve race equality at the Bar.”