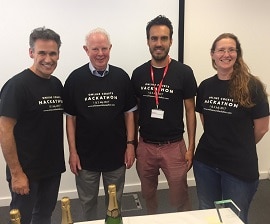 Some 220 lawyers and technologists battled each other at a 24-hour hackathon over the weekend, judged by a panel including High Court judges and aimed at devising useful software tools that could support the forthcoming online courts.

From among 30 teams participating, it was won by a team from technology alternative business structure Wavelength.law and the Law Society, which used voice interaction and an online help assistant called COLIN (the Courts OnLine help agent), who could provide triage support, DIY advice, and ultimately put people in touch with solicitors.

The runner-up was a team from Pinsent Masons, which created MobiMapper, a ‘case visualisation and argument mapper’ which “narrows the issues of a case into a single document that a litigant in person might bring to court”.

The hackathon, hosted by the University of Law in London, was organised jointly by the Society for Computers and Law (SCL), lawtech community Legal Geek, the judiciary of England and Wales, and HM Courts & Tribunals Service (HMCTS).

Prizes were dispensed by the Lord Chief Justice, Lord Thomas of Cwmgiedd, in the presence of the current president of the SCL, Professor Richard Susskind, and two former SCL presidents, Sir Henry Brooke and his predecessor, 93-year-old Sir Brian Neil.

In an indication of the level of interest in technology and the law, more than 400 applied to attend the hackathon but just 220 were accepted.

The organisers said they aimed to have “a balance between coders and lawyers”.

Legal Geek reported there were “half of London’s top-20 law firms along with leading universities” present, as well as teams from India and Australia.

Challenges set for the team to solve fell under eight headings:

The organisers stressed that contestants should “construe [the challenges] very broadly and not to be constrained by the limitations in imagination of those of us who put the challenges together”.

Judges included Mrs Justice May, Mrs Justice Carr, and Amanda Finlay, chair of access to justice charity Law for Life. They heard pitches from a shortlist of nine contestants.

In a blog, Sir Henry said he was particularly taken with “an online mediation system, with the mediator using a private chat facility to edge each side closer to a consensual settlement as more documents were filed on the site which strengthened the case of one side or the other”.

He expressed reservations about confidence – particularly from City law firms – in what artificial intelligence (AI) could achieve.

“I have never been starry-eyed about what might be achievable, and some of the more visionary applications [of AI at the hackathon]… leave the sceptic/ inquirer after knowledge with a lot of unanswered questions”, he said.

The organisers said the winning entry “went above and beyond the set challenges”. It included triage of a legal matter involving “a chest complaint in a doctor’s surgery through each stage of a possible claim against a landlord”.

The Law Society said it was “a digital system designed to help people understand their legal problems and connect them with appropriate help such as local solicitors”.

As well as coders from Wavelength, the team included Peter Wright, chair of the Law Society’s technology & law reference group, and Sophia Adams Bhatti, the society’s director of legal and regulatory policy.

There were also prizes for the ‘craziest idea’, which went to the Two of Us – a tool to increase empathy in divorce proceedings, ‘best teamwork’ – won by the Australian Gilbert & Tobin team, and for ‘coolest tech’, won by a team from Cambridge University for ClaimR – which the organisers called “an algorithmic decision tree that predicted case outcomes to 83% accuracy”.

Legal Geek founder Jimmy Vestbirk, told Legal Futures: “The hackathon exceeded my expectations; it was truly an amazing event, with teams flying from as far as Australia to participate. I was very proud that a team made up of individuals, who did not know each other before the event, ended up winning a prize.

“Hackathons have an important role in bringing people from all backgrounds together and this event embodies the community spirit we have created with Legal Geek.”

Professor Susskind said “Online courts are likely to be the most significant development in our court system since the 19th century, enabling far greater and affordable access to justice. We are bowled over by the response to the hackathon.”