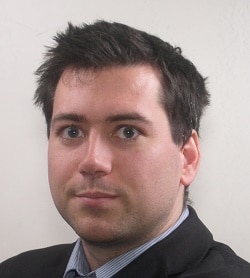 Batchelor: SRA much more expensive than Master of Faculties

A notarial firm based in Norwich has become the first to be regulated as an alternative business structure (ABS) by the Solicitors Regulation Authority (SRA).

Merlin Batchelor, director of Notary Express, said he set up the firm three years ago with the help of an emergency £800 loan from the Social Fund. He said the business is currently on course for a turnover of £400,000 this financial year.

Mr Batchelor told Legal Futures he started the firm when he was attempting to work from home and look after his young daughter as a single parent.

“I had to make it work,” he said. “Accepting the loan meant I would not be able to go back on job seeker’s allowance for 12 months. It was quite an incentive.

“If I had failed, I would have ended up begging in the streets. The loan has been paid off.”

Mr Batchelor, a dual-qualified solicitor and notary, said it was not possible for him to set up a law firm regulated by the SRA in 2013, because he had only been qualified as a solicitor for six months. The Master of Faculties, who regulates notaries, is an administrative arm of the Archbishop of Canterbury.

He said the application to the SRA for an ABS license was triggered by his decision to appoint the first non-notary employees earlier this year. The firm currently employs two dual-qualified solicitor notaries, two solicitors and two licensed conveyancers – all of them working as self-employed consultants.

Notary Express specialises in notarial work, including authentication of documents for use abroad, along with conveyancing and probate.

Fee-earners, including Mr Batchelor, are expected to meet clients in their own homes, which are listed as offices on the firm’s website. Consultants are also expected to be available seven days a week, from 8am to 10pm.

“Clients often want to instruct someone local, and having the offices helps us sell our services. We don’t do any litigation. We try and collaborate with local law firms because of this, and because a lot of work is notarial in nature.”

Mr Batchelor said the day after Notary Express got its application to the SRA to become an ABS, the Master of the Faculties applied to the Legal Services Board to become an entity regulator.

He said the “big reason” for not going back to the Master of the Faculties was the need to stay on mortgage lender panels.

“Many lenders don’t realise that the Master of the Faculties is a regulator and don’t understand the situation at all.”

However, he said there were also reasons for leaving the SRA – the level of their regulatory fees and the cost of indemnity insurance as an ABS, which had surged from £2,000 to £12,000 per annum.

Mr Batchelor said he felt a sense of loyalty to the Master of the Faculties. “They gave me the chance of a career, when I couldn’t set up a firm regulated by the SRA.”

He said Notary Express currently aimed to be a big nationwide consumer law firm, and doubled in size and turnover every year since it started.

“We want to be one of the big players. We want to keep on growing and have as many offices across the country as we can.

“The people who work for us find it very rewarding. They can do as much or as little as they want, and their average earnings are £6,000 a month. They’re happy with that.

“We get a lot of repeat work from clients. They love the fact we’re open seven days a week. We don’t have a lot of office overheads, so we can return the money to staff in higher salaries.”