Non-binary barrister: “Judges can be ignorant of gender neutral address” 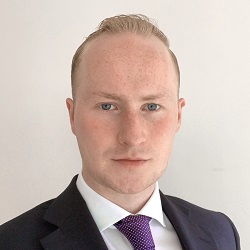 A barrister who identifies as non-binary sometimes has to endure a judge’s ignorance about the correct form of address, a meeting heard this week.

Oscar Davies, who since last year has been a tenant at Lamb Chambers in central London, uses ‘Mx’ (pronounced ‘mix’) instead of ‘Mr’ or ‘Ms’, and the gender-neutral ‘they’ or ’them’.

The lawyer is believed to be the first openly non-binary practising barrister.

Mx Davies was speaking at an online seminar on inclusive workplaces for trans and non-binary people held by the Solicitors Regulation Authority (SRA).

They said they use Mx on official documents so that judges can see without having to ask. But some ask anyway: “Sometimes they think it’s a typo and will say ‘mister’, which is annoying, but fine.

“Sometimes I correct them, sometimes I don’t. To be honest, it depends on how complicated the case is and how much energy I have, at that time, to correct a judge who you need to get on your side.”

They went on: “You have to pick your battles. In an ideal world, everyone would get Mx correct. But I appreciate it can be new to some people.”

The barrister reported that instructing solicitors were often “very good”, because their firms had training on diversity issues.

It was important that assumptions on gender were not made in the absence of hard information. In some cases, repeated address mistakes could be perceived as “micro-aggressions, or even if done too many times could constitute harassment… in an employment tribunal context”.

While non-binary identification was not codified in statute in England and Wales, it had been held to be protected under the Equality Act 2010 in the employment tribunal case of Taylor v Jaguar Land Rover.

A simple way to avoid offence and ‘misgendering’, was to refer to the person by their first name. When Mx Davies first met someone, they would introduce themselves as Oscar so as to pre-empt doubts as to the correct address.

Robert Loughlin, the SRA’s executive director of operations and performance, told the event: “It is really important that the legal sector is accessible and welcoming to everybody in society, including trans and non-binary people.

“People from trans and non-binary communities are often marginalised and may need access more than most. So it’s important… [they] are treated with respect and addressed in a way that they’re comfortable with.”