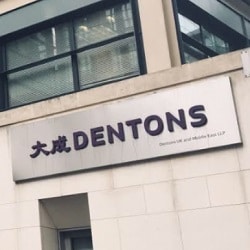 An international law firm must disclose documents relating to a failed gold dust investment scheme which showed “the classic hallmarks” of fraud, the High Court has ruled.

Master Clark said the fraud exception applied to documents held by Dentons on behalf of the company behind the scheme, which would otherwise be protected by legal professional privilege.

She said Dentons drew the attention of the authorities to the scheme after it closed, by sending a suspicious activity report (SAR) to the Serious Organised Crime Agency.

Master Clark said Salans LLP, one of the law firms that merged to form Dentons in 2013, acted for Anabus, a company incorporated in Cyprus and which operated the scheme.

The scheme was promoted by Anabus to investors from spring 2010, but it closed by the end of October that year, leaving most of its investors unpaid.

About 240 investors, invited to invest in gold dust, claimed that the law firm “recklessly or negligently enabled the scheme” and gave it “apparent respectability”. They said the scheme was fraudulent and they lost over €6.5m.

The law firm took a “neutral” position on the claimants’ disclosure application, though it made submissions through counsel.

Also involved was LLPP Insure, an English company which “held itself out” as trading in after-the-event insurance and was also a client of Salans. LLPP went into liquidation in November 2013, while Anabus was dissolved in 2016.

Master Clark said there was “no evidence that any formal insurance policy was ever in place” to support the scheme and the “nearest arrangements to insurance” included an “undertaking” offered by Dentons on behalf of LLPP.

Delivering judgment in Addlesee and others v Dentons Europe [2020] EWHC 238 (Ch), Master Clark said the relevant fraud was not of the law firm, but of Anabus or LLPP.

She said that from the scheme’s closure in October 2010 to around February 2011, Dentons “continued to act for Anabus, and played a central role in its efforts to reassure investors”.

However, by January 2011, the law firm sent the SAR, saying it had been told by Anabus that it was trying to secure a loan from the bank in Cyprus, which could not be named, to be transferred to a “family lawyer in Dorset”, who could also not be named.

Master Clark said no funds arrived and “no payments were made to the majority of investors”.

She said the Anabus scheme had the “classic hallmarks” of a fraudulent scheme, including the promise of “impossibly” high returns, reliance on “exotic investments”, an express appeal to “everyday folks” and “reliance on solicitors to produce comfort letters and provide plausibility”.

The master said she was satisfied that the claimants had shown not only a “strong prima facie case” that the scheme was fraudulent” but a “very strong and compelling case”.

If she was wrong, Master Clark said the claimants had a “sufficiently strong prima facie case” that LLPP used Anabus as “an unwitting tool or mechanism for its own fraud”.

She said Dentons produced “numerous comfort letters” for both Anabus and LLPP, the purpose of them being to “encourage, directly or indirectly” investment in the scheme. This purpose fell “outside the normal lawyer/client relationship”.

Master Clark concluded that the claimants had both a strong prima facie case and a “very strong and compelling case” that Dentons was instructed for the purpose of furthering the scheme.

The “fraud exception” applied to the documents it held for Anabus which would otherwise be privileged.