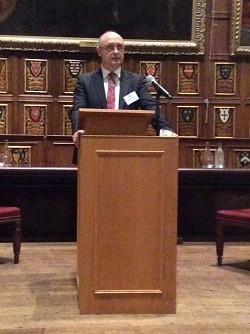 Langdon: inaugural speech amid the splendour of Middle Temple Hall

The incoming chairman of the Bar last night questioned the way court modernisation is being carried out, expressing concern that there is “no plan B” if digitisation does not work and that the justice system would lose its essence by moving to online hearings.

In a wide-ranging inaugural speech given at Middle Temple Hall, Andrew Langdon QC also highlighted his intention to address threats to the junior Bar and “to attend to the needs of core practitioners”, rather than focusing on alternative business structures and other new ways for barristers to practise.

Mr Langdon is a criminal law specialist at Guildhall Chambers in Bristol and former leader of the Western Circuit. He takes over as chairman of the Bar Council on 1 January 2017.

He said that what was happening with the court reforms “seems more akin to an organisational ‘change management’ programme for a FTSE 100 company”.

He explained: “It feels as if we are in the hands of consultants. The process of change involves champions, some of them senior judges, and stakeholder leaders: and we are all encouraged to endorse the message.

“Some of the language used by senior judiciary in describing what is coming our way has become almost evangelical in tone.”

Mr Langdon acknowledged that some of what was planned was “not only sensible but long overdue”, such as digital case working. But he said critics of the wider programme should not be sidelined on the basis that they lack vision.

“It may rather be that they see all too well, but they do not like what they see. If we are to have a proper debate, we need to air our views.”

He articulated two specific concerns: “I am not persuaded that making revolutionary change when there is no plan B is very sensible. Are we keeping courts open and resourcing traditional means of delivering justice sufficiently, while trying out plan A? If not, it means of course that plan A has to succeed whether or not it is a good idea…

“Second, I am not convinced that moving to a world where the default position is that a hearing will be virtual as opposed to real, is a good idea. I am sure it is cheaper. I am sure it is more convenient. I am sure there are many who would rather not go to court. The question is: Should those factors: price, convenience and a disinclination to attend court, be the predominant considerations in the delivery of justice in an open society?

“Most of us – lawyers or not – instinctively understand the solemnity or as it is sometimes put, the ‘majesty’ of the law… Whereas no-one wants court users to be overborne or intimidated, neither will it be helpful if respect for those who administer the law is diminished by the very fact that those who come before the court are only in the virtual presence, rather than the actual presence of judicial authority.”

On the junior Bar, Mr Langdon said that despite the continued increase in the size of the profession since 1990, in recent years there has been a decrease in those of less than 10 years’ call, a trend that needed to be reversed.

He outlined worries about the impact of Lord Justice Jackson’s review of fixed recoverable costs, but praised the progress made on reforming the advocates’ graduated fee scheme for criminal legal aid work.

“We need also to press for reform to ensure that the best advocates in the market are instructed. That does not happen at present… Every year the proportion of Crown Court legal aid spent on in-house advocates increases at the expense of the independent referral Bar.

“Very few would argue that this is a result of fair competition. There is an obvious strong public interest in public funds being spent on the best available advocates. We have suggested that the LAA ought to operate a ‘purchaser’s panel’, with advocates graded according to training, skill and experience. Judges and leading representatives from both branches of the legal profession should assess and grade applications in a system akin to but more robust than the CPS grading system.

“This is not Bar-protectionism; rather it protects and enhances the best advocacy. If we can bring it about it will help restore confidence at the junior criminal Bar that those that achieve excellence will prosper.”

On forms of practice, Mr Langdon said the Bar Council has “for years concentrated on trying to help those who want to diversify their practice, and on presenting alternative business models, and on enabling direct access.

“All these initiatives are important but as someone who has been aware of the effort expended on them, I have joined those who eventually ask: ‘What about the core?’

“The chambers model persists because it is economically efficient, and its ethos strong… I fear that endless initiatives which push other models or suggest other fields of practice, well-meaning though they are, serve to alienate the core who feel, in consequence, left to their own devices…

“We should not neglect this, the bedrock of our profession. One of the missions of my chairmanship is to try to provide leadership which focuses on the needs of this constituency.”