Quindell Portfolio, the company waiting for approval of its acquisition of Liverpool law firm Silverbeck Rymer, is targeting an aggregator model to allow claims management companies (CMCs) to survive once the ban on referral fees goes live.

It has made cloud-based claims management network Intelligent Claims Management (ICM) the latest of several acquisitions as part of its bid to build an end-to-end outsourced claims-handling operation for insurers.

ICM provides it with a software-based virtual network of independent CMCs, which submit business to ICM’s service providers – solicitors, credit hire companies, medical agencies and many others – and connects them all in the same online space, saving time and money.

Quindell said it intends ICM to provide a platform to engage directly with a wide range of independent CMCs, “extending its reach more broadly into the insurance supply chain, driving though service synergies, changing the way in which the industry operates, lowering the cost of claims and improving service for clients”.

In a statement to the Stock Exchange, AIM-listed Quindell said: “With the banning of referral fees from April 2013, the integration of the ICM platform and network within the Quindell operation will offer independent claims management companies an alternative business structure through which to continue to transact business in a more controlled and regulated ethical environment, stamping down the cost of claims.”

Rob Terry, the chairman and chief executive of Quindell, said: “We believe that this acquisition will further enhance Quindell’s unique offering to the insurance industry and provide a viable and profitable way forward for smaller independent claims management companies to operate in a regulated environment under an aggregated model.”

ICM chief executive Karl O’Hare added: “Quindell offers us a fantastic opportunity to play our part in the changes to the insurance industry that will come into effect from April next year. We see great benefit to combining our technology enabled, cloud-based network of claims providers with Quindell’s business model, collectively helping to drive down costs for the insurance industry and ensuring the survival of professional claims management organisations post the referral fee ban.” 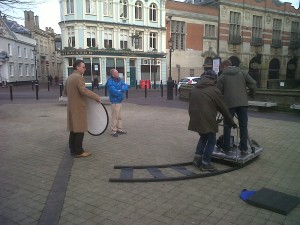 The advert tells the stories of three of the firm’s clients through interviews, and as well as being broadcast on television, the campaign was spread around a variety of online media platforms. The website hosted the extended stories behind each case.

Managing director Neil Hudgell said: “We wanted to do something a bit different with this advert and asked our clients Jo, Keith and Susan to speak for themselves and for us. We’re very grateful to them for taking part in the advert and the other videos and we’re extremely pleased that members of the Royal Television Society have now recognised our efforts and honoured us in this way.”

Essex personal injury firm Lloyd Green Solicitors today has pledged to make a £300 donation to the Royal National Institute of Blind People (RNIB) for every accepted case that comes to the firm directly, rather than through a claims management company.

Managing partner Lloyd Green said he hoped the scheme would encourage more people to seek assistance from solicitors directly after an accident. He added: “Currently, many charities are struggling financially due to a drop in donations and government cuts and these have to be made up somewhere. Naturally, we would sooner see the money go to RNIB than into the pockets of insurers and others through referral fees.

“If the scheme encourages people to instruct solicitors directly, rather than through needless intermediaries, all the better.”

Arrangements which give clients of alternative business structures (ABSs) access to the Solicitors Compensation Fund should be made permanent because of uncertainty about when a new scheme will be in place, the Legal Services Board (LSB) has recommended.

Last year a temporary change to the compensation scheme was made to facilitate this and it is due to expire at the end of 2012. The LSB last week issued a four-week consultation to make it permanent on the grounds that the SRA needs more time to assess the nature and risks posed by ABSs before it can decide the best way forward for compensation arrangements.

In addition, the consultation said the LSB itself is beginning to look at the wider issue of the statutory basis for compensation funds across current and future regulators, work that again may take some time.