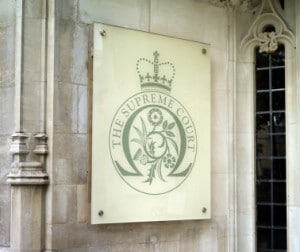 Supreme Court: appeal had no real prospect of success

The Supreme Court has refused permission to appeal against a Court of Appeal ruling that gave explicit backing to solicitors who offer ‘unbundled’ legal advice.

Last year, in Minkin v Lesley Landsberg (Practising As Barnet Family Law) [2015] EWCA Civ 1152, the Court of Appeal refused to read broader responsibilities into a limited retainer that a solicitor had agreed with a divorce client to finalise her consent order, describing unbundling as an “invaluable” service to both the court and litigants.

The Supreme Court refused permission “because the application does not raise an arguable point of law of general public importance and has no real prospect of success on the facts”.

The Council for Licensed Conveyancers (CLC) is planning to reduce regulatory fee rates for all firms by 20% this year, it announced yesterday. They have been frozen for four years.

It said: “The financial statements and the annual report published in February evidence a year of wide-reaching change, including the CLC’s staffing restructure, investments in improved processes and IT, and a move to premises more suited to the organisation’s current work. These changes have placed the regulator onto a new footing for the future.”

The precise figures will be consulted on later this year, for implementation in November, while rates for contribution to the CLC’s compensation fund will remain “flat”.

CLC chief executive Sheila Kumar said: “I am delighted to confirm that the CLC’s future operations will continue to deliver the same high standards of regulation and consumer protection at a much reduced cost to the regulated community that is sustainable in the long term…

“The savings to our cost base, which will begin to be realised in 2016, can be built into our planning for the coming years. Those savings and have given the council confidence to announce a 20% reduction in entity regulation fee rates across the board from the beginning of the next licence year on 1 November 2016.

“Alongside the review of the CLC’s Handbook that is now underway, these changes demonstrate our commitment to ensuring that specialist regulation of specialist property lawyers is as tailored and proportionate as possible so that we continue to support innovation and growth in the sector.”

The average 3.3% annual growth in the legal services sector over the last decade has well outstripped the UK economy as a whole, which grew at 1.2%, according to research published this week by the Law Society to demonstrate the economic value of the law.

Analysis of statistics largely from the Office of National Statistics found that 8,000 new jobs are created and £379m is added to the economy for every 1% growth in the legal services sector, while each £1 of extra turnover stimulates £1.39 in the rest of the economy and every 100 extra jobs in legal services supports a further 67 jobs.

The direct contribution that legal businesses make to the UK economy was £25.7 billion in 2015, of which 63% was for business-related services. Financial services, insurance and pensions was the single biggest category of business demand for legal services.

The research, conducted with Cambridge Econometrics and Oxford Economics, said that an estimated 370,000 people are employed in legal services in the UK, of whom. 63% are solicitors or employed by solicitor firms.

Net exports of legal services have grown by an average of 5.6% per annum over the last 10 years, to £3.6bn.

The Law Society is using the research as part of its campaign to repatriate standards setting from the Solicitors Regulation Authority. Chief executive Catherine Dixon said: “The provision of expert legal services is fundamental to the success of business and commerce and underpins the very fabric of our society…

“However, like many sectors, legal services operate in a complex and fragile ecosystem. It is important that any changes to the regulatory and legislative environment for the legal services sector are fully considered to avoid any unintended consequences of change, which could put our position as the jurisdiction of choice at risk and so jeopardise future success.”

Michael Smyth CBE QC (Hon) – one-time partner and global head of public policy and government relations at Clifford Chance – and Jemima Coleman, a professional support lawyer in the employment team at fellow City giant Herbert Smith Freehills, have been appointed to the Legal Services Board.

They will next month fill the ‘non-lay member’ vacancies after the terms of former Law Society president Ed Nally and Anneliese Day QC expired. The new appointments are for three years and they will be paid £15,000 per annum for at least 30 days’ work.

At the same time, Terry Babbs a current lay member, has been reappointed for a further 18 months.

The Ministry of Justice has branded as a success the Choice not Chance campaign it ran in England and Wales during March 2015 to promote the use of wills, lasting powers of attorney and organ donation.

Minister Dominic Raab said: “We consider the campaign was successful in promoting the making of wills. We were unable to obtain figures for wills made during the campaign but the campaign page on gov.uk received 3,515 views and 19 campaign tweets resulted in 1,268 ‘click throughs’ for more information.

“Further, the question of making a will is often considered at the same time as the question of making a lasting power of attorney. During the campaign 35,525 lasting powers were made (a 42% increase over the corresponding period in 2014) and 85,743 people accessed the online LPA tool (a 66% increase in average page views compared to the previous 6 months). A further success is that our campaign materials continue to be used by practitioners.”

Meanwhile, the Law Commission has said that it does not intend to consider the question of whether will writers should be regulated as part of its project looking at problems with the law of wills that affect whether or not a will is valid, such as testamentary capacity and the formalities required for a valid will.

In a letter to MP Alberto Costa, who raised the issue during an evidence session held by the justice select committee last month, Law Commission chairman Sir David Bean QC said such an investigation would require government support, and the commission “would have to be satisfied that undertaking a project would add value to the work already done by the Legal Services Board [in 2013]”.

There will be no extension to arrangements providing insurance cover for closed firms beyond the current six-year run-off period, the board of the Solicitors Regulation Authority (SRA) decided earlier this month.

Any practice that has shut since September 2000 without a successor currently enjoys additional professional insurance cover through the old Solicitors Indemnity Fund (SIF) for any claim made after the six-year run-off has ended. This arrangement is scheduled to end in 2020.

The Law Society had asked the SRA to increase the cover for a further three years to 2023, but the board decided not to change the current arrangements. It said that extension would be contrary to existing policy aims, and SIF might not have sufficient funds to cover the additional claims.

SRA chief executive Paul Philip said: “We consulted on reducing the amount of run-off cover because many see it as a barrier to closing down, and that’s still something we want to look at. Extending cover through SIF would be contrary to that aim and would be suggesting that six years’ run-off cover is not enough.”