New-style legal offerings making their mark in the corporate world 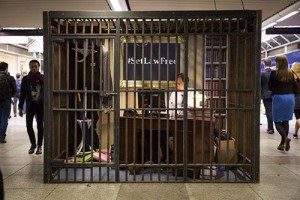 Meanwhile, Keystone Law has made waves with a daring publicity stunt in one of London’s busiest train stations.

LOD, which is a group business of City firm Berwin Leighton Paisner – provides freelance solicitors to companies and other law firms on a short or longer-term basis. Its lawyers, who now number over 200, have access to Berwin’s know-how, professional support and training.

New services represented more than half of this year’s growth; in 2014 it launched transaction teams as an extension of its On Call service, offering mid-level and senior lawyers to work remotely on routine and stand-alone parts of complex client matters. It also moved into Manchester.

Other statistics issued by LOD were that 19 of its top 20 clients instructed the business during the past year; it worked with 14 law firms, almost double from last year; and in all completed more than 300 assignments across the year.

Co-founder Simon Harper said: “Our growth this year shows how the market is embracing LOD’s new wave of services to create flexible legal teams. After originating the flexible legal service concept back in 2007, LOD is now leading its further evolution in a constantly changing market.”

Excello Law has teamed up with Rimon, which has 40 lawyers, with offices in 14 locations coast to coast across the US, as well as in Tel Aviv. It offers corporate, litigation, tax, intellectual property and private client advice, with a particularly focus on the financial services and technology sectors. Clients include Polaroid, Samsung, BP and Toyota.

The news follows Excello’s move to shake off the ‘virtual’ law firm tag by “laying down solid roots” in Leeds, following office openings in London, Liverpool and a first international presence in Sweden.

It said that unlike virtual firms that simply offer their lawyers access to office facilities, Excello has dedicated offices supporting its “experience heavy, bureaucracy light” approach to practice.

Excello Law’s founder and managing director, George Bisnought, said: “The alliance with Rimon is a significant step for us, giving Excello Law further international reach. We have been approached by a number of US operations but Rimon was the firm most closely aligned with Excello Law’s ethos and culture. Like Excello, Rimon’s lawyers are all hugely experienced and are drawn from top firms and major corporations.”

Keystone Law, another dispersed practice, attracted significant coverage for a live installation in the exhibition space at Liverpool Street Station. Under the tagline ‘#SetLawFree’, the installation featured a lawyer trapped in a prison cell, “highlighting that a career in law doesn’t have to be this way but all too often is”, the firm said.

Keystone, which already has more than 160 lawyers on its books, has a stated aim of attracting 50 senior partner-level lawyers by the end of the calendar year.

Managing partner James Knight said: “The inspiration for this Set Law Free installation came through the feedback we’ve received from our latest recruits. So many of them described feeling trapped and frustrated in the traditional law firm structure and cited this as one of their biggest reasons for wanting to move.”